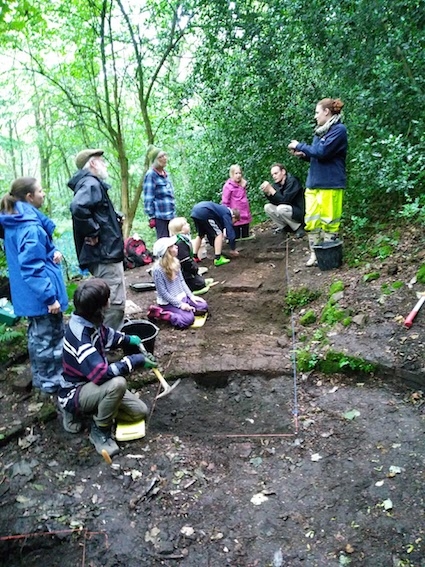 The Leeds Branch of the Young Archaeolgists Club (YAC) recently undertook a new excavation of an ice house, at Middleton Park, Leeds which once belonged to the former Middleton Lodge.

YAC is the only UK-wide club for people under the age of 16 who are interested in archaeology. An invitation was extended the York and Pontefract branches to join the excavation. Leeds YAC were delighted that they could join on Saturday (15 July 2017) afternoon and Sunday morning (16 July 2017) respectively. Members of the South Leeds Archaeology (SLA) Group, who partially excavated the ice house four years ago, were also invited and a few members also joined us for the weekend. The excavation was supported and supervised by the Leeds YAC Leaders teams, with equipment provided by members of YAC, the Council of British Archaeology and SLA and employees of CFA Archaeology Ltd and CITiZAN.

Early in the new millennium, Paul Hebden of FoMP, was intrigued by the results of the Friends of Middleton Park’s Community Archaeology Survey in 2006, which suggested that an area in the park named ‘Ice Hill’ would lead to an ice house. The hill is north-facing with an access road, and all large houses, like Middleton Lodge, of the 18th and 19th centuries had an ice house for storing ice. As such, Hebden searched the area, and confirmed with the help of SLA , that some hidden old bricks in the foliage were the remains of the ice house. The 2013 excavation, reported by South Leeds Life here, exposed the extensive brickwork and facing stones that would’ve sat at the base of the long demolished dome covering. Time constraints meant this excavation finished with questions still unanswered, including: where was the entrance?

The trench extended the length of the entranceay and continued into the ice house proper. A second small trench was placed on the internal elevation of the ice house to identify its structural features. Leeds YAC with the help of those from Pontefract and York exposed and recorded the entranceway and ice house through a combination of achaeologial techniques including, hand excavation, technical drawings and survey, using a robotic Trimble and Nikon total station.

Various finds were all uncovered, primarily associated with the Industrial era.Curiously the ice house itself seems to get wider as it gets deeper, instead of getting narrower. More research is needed to contextualise the finding and there maybe scope for more research in the future.

Leeds YAC Branch was initially made possible due to the Heritage Lottery Funded project ‘Parks for People’ with the support of Leeds City Council who provided  the space at Middleton Park Visitor Centre, and of Wade’s Charity. Leeds YAC meet at 10am on the third Saturday of every month, excluding day trips and summer holidays, at Middleton Park Visitor Centre. Leeds YAC is aimed at any child aged 8-16 who has an interest on exploring archaeology, history and life in the past.