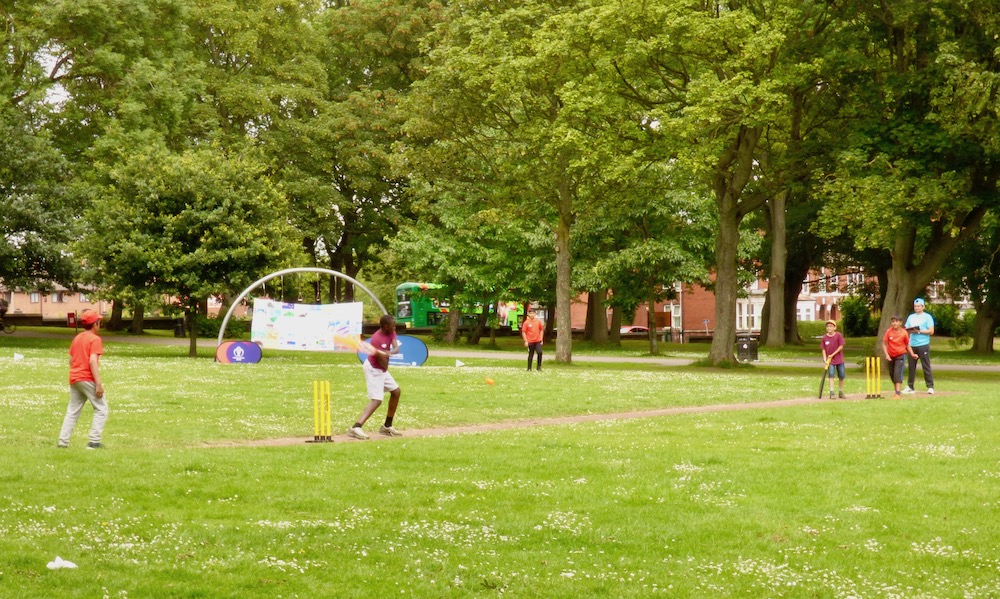 Never mind what’s going on at Headingley and Lords, the real World Cup Cricket action came to a head in Cross Flatts Park on Sunday (7 July 2019) as Bangladesh faced the West Indies in the final.

I spoke to Hassan Hussain, a coach with Yorkshire Cricket Foundation (YCF) and one of the organisers of the children’s tournament that has been taking place in Beeston over the past few weeks.

“We run a cricket group each Sunday, called Chance To Shine, here in Cross Flatts Park. From the 30 kids that come regularly we selected six teams to represent nations in the tournament and we provided kit so they can play in the country’s colours.

“All the teams are from the local community of Beeston, a lot of the team members go to school together, to church or mosque together, so they all know each other.

“It’s been really good. We’ve got some families here today who have come to support their children. People passing by have stopped to watch. It’s been a good day of fun and the best bit about it is the weather’s been on our side over that few weekends.”

The first ball of the tournament was bowled at Dewsbury Road Community Hub at the cricket fun day on 15 June. That was followed by a session at the Hamara Centre on 30 June.

“Parents have seen us and they’ve wanted their children to join in and we’ve handed out flyers so they know when the sessions are on. And obviously with the World Cup going on there’s a lot of interest in cricket at the moment.”

“YCF have come into this community of Beeston and allowed us to have this opportunity and give kids something different to do.

“This is what the kids look forward to, the competition. They’ve been doing sessions every Sunday and this is, in a way, a reward for them.”

Sunday’s matches saw England and Afghanistan fall at the semi final stage and then Bangladesh triumph over the West Indies.

“This is what its all about, getting kids off the streets and giving them different opportunities in life. Naturally they’ll pick up many skills just by playing, they won’t even know about some of the skills they are picking up. So for example communication skills, making new friends, playing as a team.

“It will not only help them with their cricket, but in everyday life. Confidence, when they transition to high school it gives them something to talk about with their friends, it will develop them in many ways.

“The tournament’s been really good for the children and for the community.”