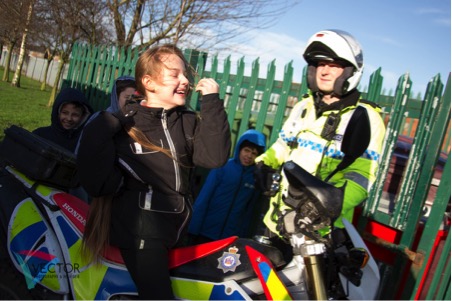 20 mph zones have been popping up all over Leeds for more than 20 years now. However, as the new limits are introduced in a bid to bring down accident rates, in many neighbourhoods they have been seen as the exception rather than the norm. This has not helped drivers to appreciate the need for lower speeds.

Middleton and Belle Isle reflected this mosaic of 20 mph and 30 mph speed limits in often identical neighbourhood streets. Where the new, lower speed limits had been provided in the area, they contributed significantly to reducing traffic casualties – in the five years since the signs went up, there were 49 fewer people injured in comparison to the previous five years; 12 fewer people suffered a serious injury. The statistics are particularly encouraging for child casualties – in the five years after the speed limit changed from 30 to 20 mph, these went down from 29 to 13.

The new 20 mph speed limit is now being rolled out to all residential streets in Middleton and Belle Isle other than the main arterial roads in the area: Middleton Park Road/Ring Road, Middleton Park Avenue, St George’s Road, Sharp Lane, Belle Isle Road, Town Street and Newhall Road, which will keep their current speed limit. This will be the first large residential area of Leeds to have such comprehensive approach, sending a clear message that narrow residential streets are unsuitable for speeds of up to 30 mph: they are used by families for walking, cycling and scooting, by children to socialise with their friends and travel to school, the park or a playing field, or for residents parking.

This new initiative was launched last Thursday at the Middleton Primary School, and has seen the new, lower speed limit extended over all of its catchment. The 20 mph signs have been accompanied by the children’s drawings, and the school gates are decorated with the banners bearing the 20 mph message. 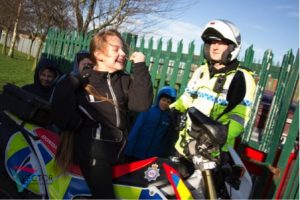 The launch day starts with the school assembly – the whole school is present. During a questions and answers session the youngsters have shown an amazing understanding of issues around car travel and speeding: ‘If the car is going slowly and they hit you, you may be OK, or not badly hurt’, ‘It is better for when you walk or cycle’, ‘There is smoke coming out of the cars, and if you walk, or cycle, there is no smoke’.

The authors of the two winning sign designs were announced and presented with their prizes by Cllr Truswell and Cllr Groves, who championed the introduction of the new speed limits on behalf of their communities and are passionate about speed reduction and road safety.

“We supported local people’s requests for the Council to extend 20 mph zones in the area. We’re getting coverage of almost the whole of Middleton and Belle Isle – the most extensive in the city. We totally support our schools and local communities in getting the 20mph message across. Research shows that 20 mph zones do reduce overall speeds for the overwhelming majority of decent and responsible drivers.

“Unfortunately, no one is under any illusion that 20 mph zones are an end in themselves. There will still be that mindless minority of reckless and irresponsible drivers who will blatantly ignore the pleas of the community and our children to curb their speed.  Government funding cuts and the conditions they impose on where speed cameras can go mean they are regrettably not an option.  Only forceful and effective enforcement by the police can tackle the behaviour of this minority, or take them off the road altogether – but we know just how stretched they area.” 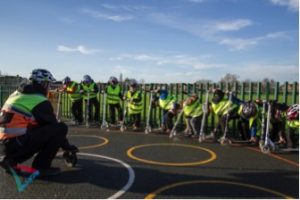 The Assembly was followed by a day of activities that were aimed at improving the children’s understanding of road safety issues and to up their sustainable travel skills to help more youngsters travel to school without a car. 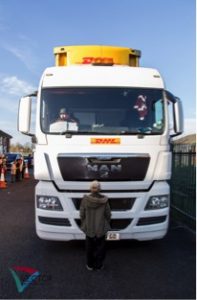 Road safety awareness featured prominently – the children had a chance to test their braking and reaction skills in a stationary Council van, with a virtual driving speed set to both 30mph and then to 20 mph. The kids were amazed that, with a van ‘driven’ at 30 mph, the vehicle would travel for up to 30m before coming to a stop; at 20 mph the stopping distance was around 15m.

A DHL lorry was parked in the school car park and the children could learn of the dangers that large vehicles may pose for other road users, and how to behave around them to stay safe when playing out or when crossing the road.

The Neighbourhood Policing Team actively supported the launch event – officers took part in scooter training and in the roadside speed watch, and a Police officer from the off-road team talked to groups of children about enforcement, with plenty of opportunities to ask questions and a chance to sit on the Police motorcycle. 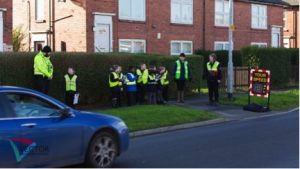 Accompanied by a Police Community Support Officer, the children also performed some speed and vehicle safety checks on the 20 mph streets surrounding the school, using a Speed Indicating Device (SID). The children noted the type of vehicle, its speed, occupancy, seat belts and any driver distractions, such as use of mobile phone while driving. No roadside enforcement took place, but the initiative served as a reminder to drivers to check their speed, and registration numbers of those driving dangerously were noted to be checked against Police/ DVLA databases.