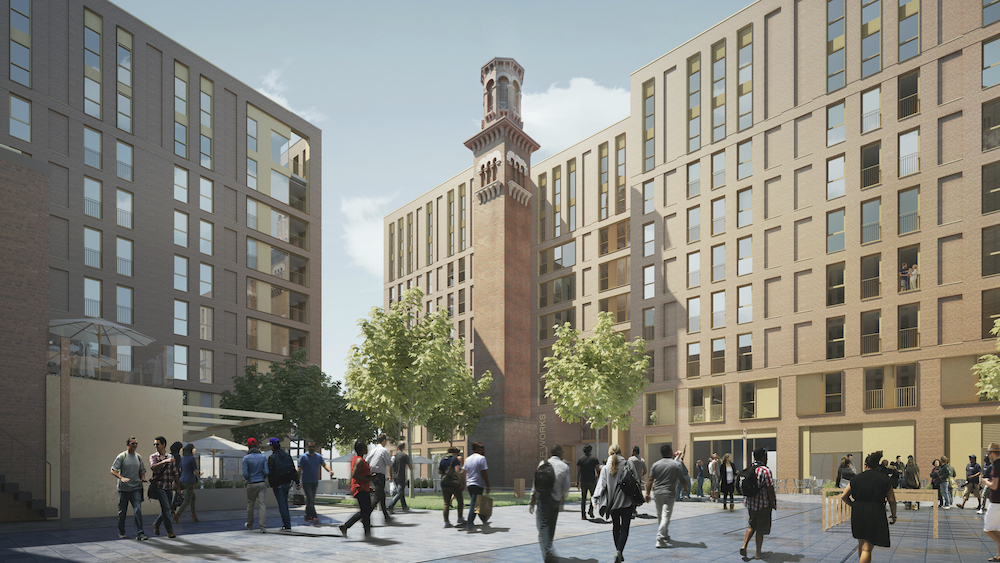 Councillors on the City Plans Panel will consider an application to build 245 flats in two building on the Tower Works site on Globe Road in Holbeck at their meeting next Thursday (20 February 2020).

The site, which originally made carding and combing pins for the textile industry, is famous for its three chimneys built to resemble Italian bell towers, or campanili.  The largest tower is based on Giotto’s Campanile in Florence. The smaller ornate tower is styled after the Torre dei Lamberti in Verona. A third plain tower, built as part of Harding’s final phase of expansion in 1919, is thought to represent a Tuscan tower house.

The scheme faces criticism from Historic England, the Ancient Monuments Society and the Canal & Rivers Trust as the new building will reduce the views of the three towers. However planning officers argue that the current 360o view has only been created by demolishing surrounding buildings. Previous plans for the site have included buildings of similar size and been approved, as have adjacent sites at Mustard Wharf (currently under construction) and CEG’s development across Globe Road.

As well as the towers, the site includes the Engine House which is owned by Leeds City council and is due to be developed for TV and film post production facilities. There will also a substantial amount of public realm open space with walking routes through the site, linking to the canal, Granary Wharf and Leeds station.

The plans do not include any “affordable” housing on site, but a sum of £1,679,000 will be paid to the Council to build housing elsewhere.

You can read the full report to the panel here.

You can read the full planning application here.

Image: artist’s impression of the new development with the Verona tower