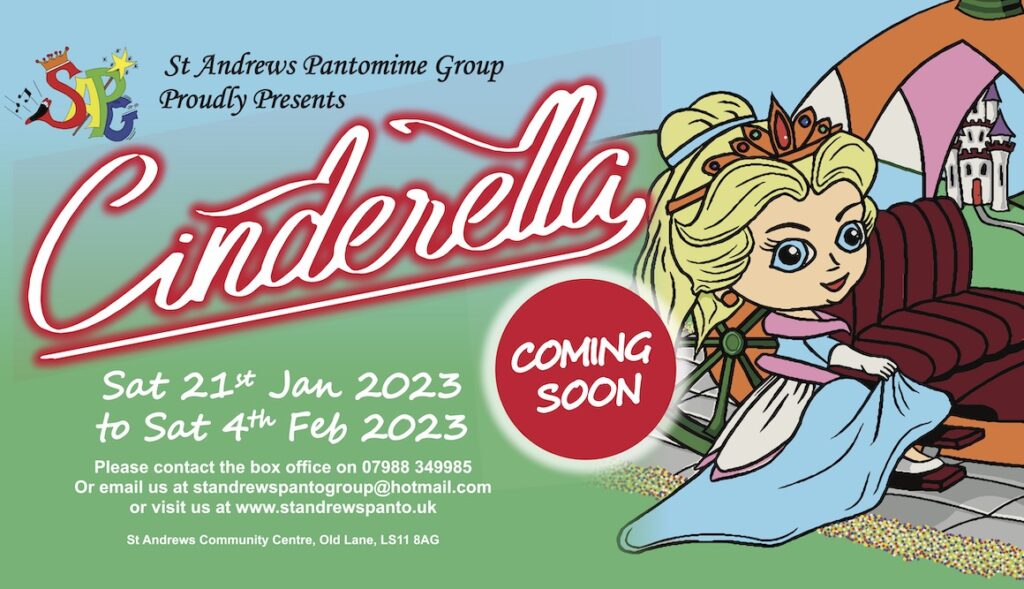 St Andrew’s Pantomime Group in Beeston have announced that this year’s show will be a re-telling of the Cinderella story.

The show, another brand new script written and produced by Rachel George, will run from Saturday 21 January through to Saturday 4 February at St Andrew’s Community Centre on Cardinal Road, LS11 8AG. This is always a seasonal highlight in Beeston and bookings are now being taken.

The group introduced the story:

“Most people know the story of Cinderella. She is a poor, orphaned girl who lives in the home of her wicked step-mother, and is treated like a servant by her unkind step-sisters. In our version of the classic tale, Cinderella lives and works at Callous Castle, where she is at the beck and call of Kendall and Kylie and their monther Kris. Thankfully Cinders has many friends at the castle who try to make her life a little easier. Buttons and Boots are her besties, and they do all they can to protect Cinders from the constant nastiness. When no-one else is around Mouse and Bird are there to keep Cinderella company, and make her laugh with their thoughts and sarcastic comments about the Callous family.

“Elsewhere Prince Rupert is facing very different challenges as he returns from his European travels alone. The King and Queen were hoping they would be able to announce their son’s upcoming marriage but he has no fiancée and no intention of settling down. In a last ditch attempt to find his son a bride, the King announces a royal ball and invites every lady in the land.

“Excitement builds in Callous Castle as Kendall and Kylie are desperate to look their best for the occasion. Poor Cinderella has been forbidden from attending, but as we might have guessed, her Fairy Godmother has other ideas. Will Cinderella finally get to meet the man of her dreams? Will Kylie woo the Prince? Will Kendall’s head be turned by a dashing pop star? Join us as the story unfolds to find the answers to these and other questions.”