We start this week with the first in an occasional series, things we learned on Twitter this week. The Leeds Discovery Centre in Hunslet has a giant squid hanging from its ceiling. Fact. 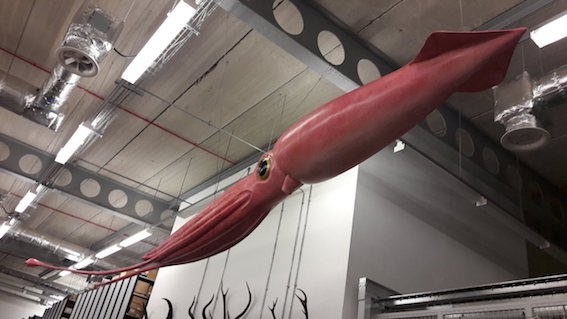 Dance is clearly thriving in South Leeds. DAZL reported on Twitter that 90 children aged 6-14 years had come along to their dance camp at South Leeds Youth Hub last week.

Meanwhile the Rhinos Foundation are helping down at Hunslet Warriors with a rugby camp as we write this.

Belle Isle Family Centre have put out a call to babies up to one year old (and their parents and carers) to join a ‘sensory jungle adventure’ next Wednesday (19 April). Apparently it’s a great bonding experience, booking is essential.

How best to celebrate the Leeds Waterfront Festival’s tenth birthday this year? Perhaps you could get a works team together to take part in the Dragon Boat races on Leeds Dock?

If you want to join The Hunslet Club’s second Messy Mile, you’ll have to hurry to order your t-shirt before tomorrow (Thursday 13 April).

This is new to us, Leeds Let’s Get Active bring you non-contact boxing! It’s called ‘Unorthobox’, it’s for parents and children and you can join in a free taster session at Cottingley Primary Academy on Tuesday 18 April at 3:30pm.

As this football season draws to a close Middleton Park FC are looking forward to next year. They will be running 17 teams ranging from under 2s to the senior first team and including girls teams and a visually impaired team – amazing. And did we mention that they are a Leeds United Academy Partner Club? Get in touch if you want to join the fun.

Journalism students at Leeds Beckett University get to practice their art on the Leeds Hacks website. A recent project looked at the state of blogging in the city and revealed that South Leeds Life is the number one hyperlocal blog in Leeds. We were delighted to hear this result which was based on backlinks (Google it), Twitter traffic and other measures.