We start this week on the Save Our Beeston Facebook group. David Dodson has posted some arial shots of the area taken with his drone, including this shot of Beeston Cemetery and Beeston Road. They have also held a poll about a proposed Resident Permit Parking Scheme for match days. 94 were in favour, 14 against. 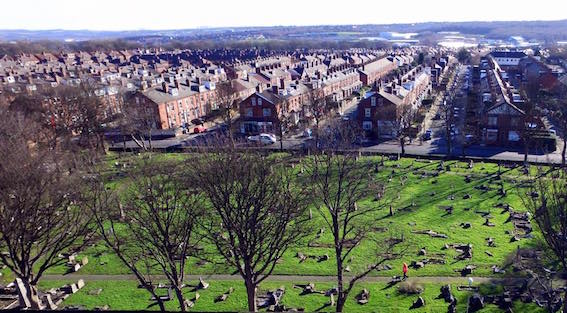 Child Friendly Leeds announced their award winners including Beeston’s Hamara Supplementary School and Hunslet-based Leeds Play Network. In a separate post South Leeds scores well in the best places in Leeds to take a baby with The Tetley and Middleton Railway both getting a mention.

If you want to know what your MP thinks about the issues of the day it’s worth checking Hilary Benn MP’s blog. He’s posted this week on votes at 16, refugees and women’s state pensions.

Refurbishment continues at The Holbeck club where they’ve installed new doors. They also have another wrestling night coming up at the end of the month.

Lensa’s worried that January went to quickly. She didn’t get done what she planned, but she did achieve other things. Read her thoughts on The Sojourner’s Musings.

HEA (Holbeck Elderly Aid) report they have joined the 21st century with a new VOIP phone system and superfast broadband. Keep up to date with their latest news on Facebook.

Cockburn School have launched their new website. The site is easier to view on mobiles and tablets and has a vibrant feel to it, but still all the information you would expect.

There’s a new Saturday Swap Shop for people who want to exchange quality clothing starting at Dock 29 (at Leeds Dock) on Saturday (13 February).

Congratulations are in order for The Hunslet Club’s Grade 3-5 ballet group who scooped second prize in their first ever competition.

Asha’s Prerona volunteering project has produced a beautiful embroidered wall hanging reflecting the journey they’ve made through the project.

Bad news: a car crashed into a gate at Middleton Park and was then torched this week. Good news: this a very rare occurrence these days and as the comments show it won’t deter people from using the park. There are also more lovely photos for South Leeds’ green gem on the Friends of Middleton Park Facebook page.

They are taking stall bookings down at Beeston Parish Centre for their next Craft Fair on 5 March.

And finally, congratulations to running group South Leeds Lakers who celebrated their first birthday with a get together at The Adelphi. They run every Tuesday at 7pm from Beeston Co-op.