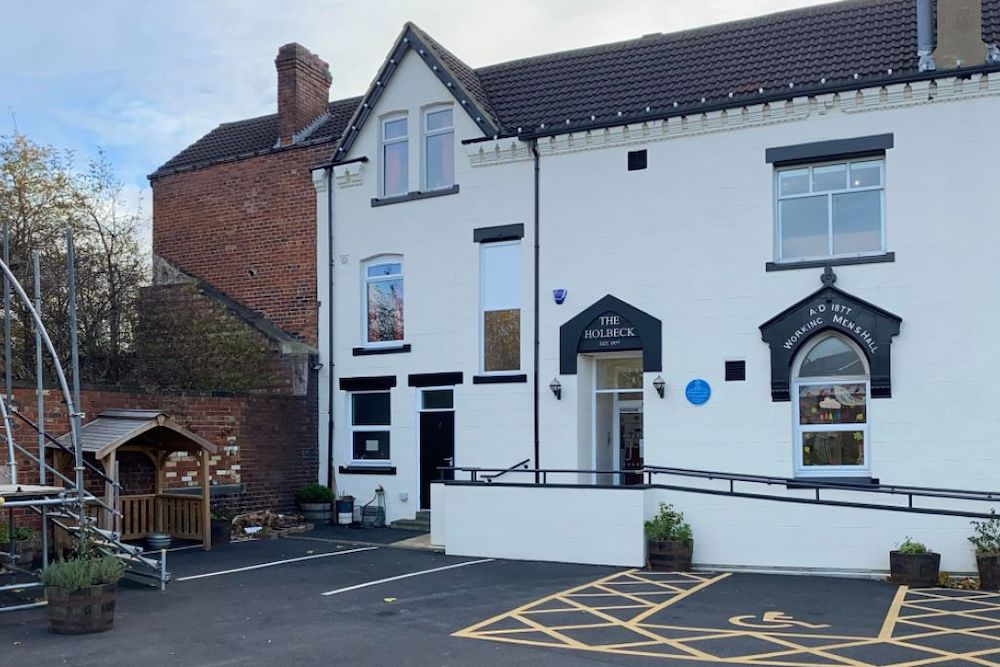 From the crematorium to the football terraces, via a one-night stand and some chamber music – it’s all going on at The Holbeck.

Slung Low present a series of visiting shows upstairs at The Holbeck, starting on Saturday (12 February 2022) with Too Pretty To Punch

A comedy spoken word show about gender, the media and not fitting any of the boxes, full of explosive movement, original songs and kickass video projection. Edalia Day is a banjo wielding, poetry slam winning, trans warrior, taking on the world one troll at a time. The show Too Pretty To Punch is a hilarious and uplifting journey through what it means to be trans in 21st century Britain. It reminds all of us (regardless of who we are) of the power of celebrating our existence.

How To Be A Better Human: A spoken word comedy about grief, loss and self-acceptance is on Saturday 19 February.

“Well, I didn’t lose him. I knew exactly where he was – in the coffin at the front of the crem.”

How to Be a Better Human is a spoken word comedy about grief, loss and self-acceptance. It tells Chris’ story of losing two of the biggest relationships in his life – Dad and Wife – in the space of a few months. It finds the lightness and humour in death, loss and divorce, exploring how they help us become better at empathising, connecting and understanding. How we can lose everything and still find the strength to rebuild. How growing a beard can be the best decision of your life, and why some hedgehogs are absolute d*******s.

Performed by Chris Singleton and directed by Tom Wright, How to Be A Better Human uses powerpoint comedy, poetry, autobiographical storytelling, original music by Reece Jacob and animation by Huckleberry Films to open accessible conversations about grief, loss and mental health.

“Walking up to Highfield Road for the first time was mind blowing. Seeing all the other people with their shirts and scarfs, feeling like you’re part of that, feeling that excitement in the air.”

1997. Last year England made it to the semi-finals of Euro 96, Gina G came third in Eurovision and 13 year-old Lizzie went to her first in-person football game: Coventry vs. Manchester City. Not the Man City of today, oil and superstars, but the old Man City – a bit rubbish, but with good fans. Lizzie fell in love with the beautiful game that day, and she’s been obsessed ever since. But then something happens to make her question her place in the stands. ENG-ER-LAND is an energetic play about who’s really on your team.

And finally in February, on 27th Winterreise by Schubert: A Concert.

The songs of Franz Schubert’s song-cycle Winterreise have long been the sole territory of the male singer, yet the themes of displacement, loneliness and isolation could not be more universally relevant. Feeling adrift, whether it be literally; the displaced person seeking asylum in foreign lands, or metaphorically; the loneliness of being connected to the rest of the world via the internet yet having no real live connection, is a universal issue. Part of the human experience is to crave to be understood and this outsider, having accepted their solitary fate, walks on.

“I arrived a stranger, A stranger I depart.“

Also featuring short creative responses to the theme of winter journeys developed by community groups in Beeston and Holbeck, Chapeltown, and Seacroft, working with Performance Ensemble.

All shows at the Holbeck are pay-what-you-decide (or can afford) – you pay after you’ve seen the show. But you need to book tickets in advance. Go to www.slunglow.org/shows and follow the links.

The Holbeck, the oldest working men’s club in Britain, is on Jenkinson Lawn, Leeds, LS11 9QX.