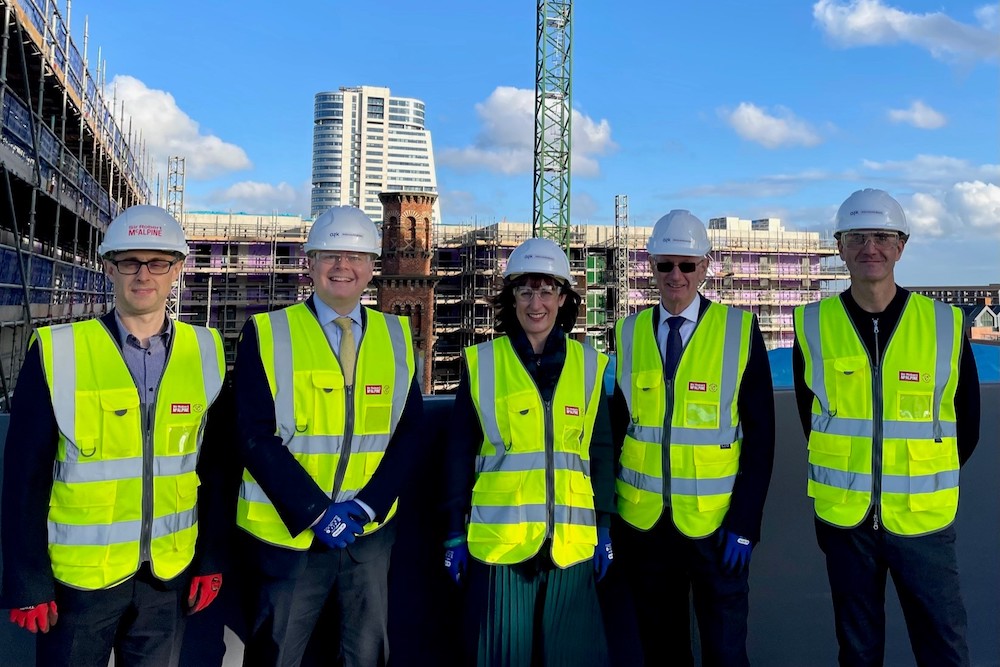 Rachel Reeves MP, the Shadow Chancellor of the Exchequer, visited the historic Tower Works scheme that is being developed in Holbeck on Friday (7 October 2022).

The MP for Leeds West received a tour of the canal-side site and an update on construction from representatives of Richardson and Ask Real Estate, who are developing the scheme in conjunction with builders Sir Robert McAlpine and Homes England, with funding from Legal & General.

Notable for its three listed 19th century Italian inspired towers, the development, which is designed by Ryder Architects, will provide a total of 245 new build to rent units across two residential buildings, with a mix of one, two and three bedroom apartments and duplexes, together with ground floor commercial spaces and extensive new areas of public realm. It is set to complete in Spring 2023.

As well as providing much needed new housing stock in the city centre, the development also has significant social value for the region.  Social Profit Calculator, in partnership with Sir Robert McAlpine, estimate the total social value of the development for the people and communities of Leeds to be nearly £18 million, with a GVA uplift of nearly £8 million achieved through investment in local supply chains and the creation of local employment opportunities.

Tower Works has also recently achieved WiredScore Platinum certification, making it the first residential development in Leeds to attain the globally-recognised verification of infrastructure connectivity. The accreditation means residents will know that their homes have been digitally future-proofed and have the best possible level of connectivity.

Richardson and Ask Real Estate are also sponsoring the upcoming  ‘Light Night Leeds’ Festival, further demonstrating a wider commitment to the cultural life of the city.

“In my Labour Party conference speech a couple of weeks ago I talked about how ‘cranes going up and shovels in the ground’ are a sign of ‘the future arriving’, so it was great to see this in practice at the Tower Works development in Leeds on Friday.

“As well as providing new housing in the city centre, the development also has broader benefits for the region, with the total social value for the people and communities of Leeds estimated to be nearly £18 million.

“It’s just this sort of development we need to see in towns and cities across the UK if we’re going to grow the economy and create strong communities in all parts of the country.”

“It was great to welcome the Shadow Chancellor to Tower Works, and to be able to showcase the development to such a high-profile local MP.

“We are very proud to be developing this scheme in Leeds city centre with our partners, delivering top quality accommodation and public realm on a historic site in a manner that will help to rejuvenate the area as a place to live and work.”

“We were delighted for this opportunity to show the Shadow Chancellor the great work achieved by the project team at Tower Works and explain how this scheme is supporting the regeneration of the South Bank of Leeds and making a tangible social impact on local communities, notably through employing the local workforce, supply chain, and apprentices.”