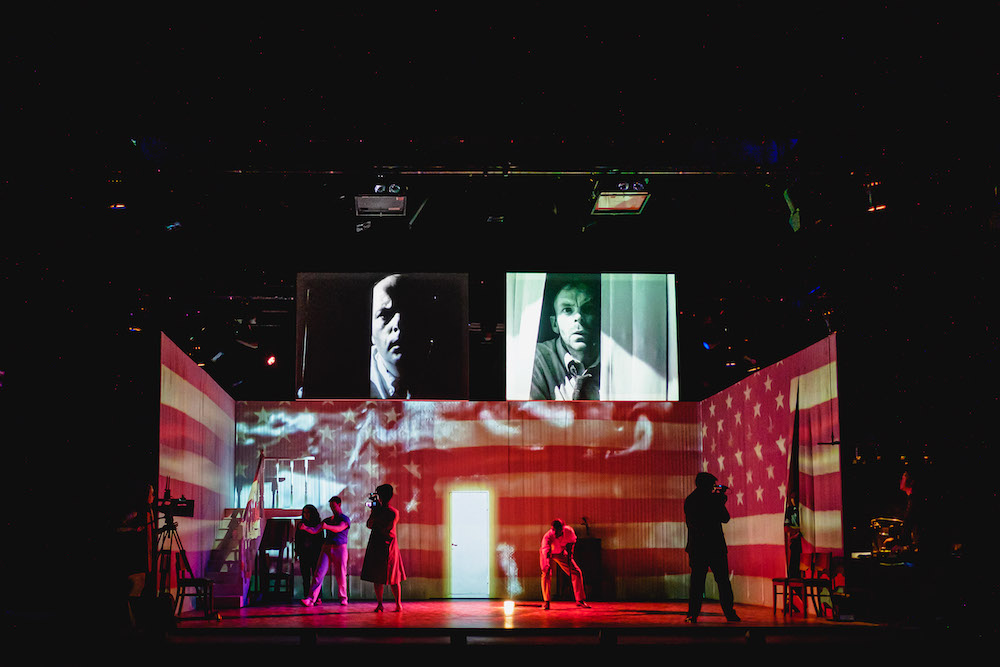 As a fan of the Zombie genre, I was worried how the play was going to bring the cult classic to “life.“ The Night Of The Living Dead, the film that brought the theme to the front of the horror film, well the flesh eating part! I didn’t need to be worried it was as good as the film with some performances better.

As their introduction says: “Fifty years on, seven performers enter the stage armed with cameras, a box of props and a rail of costumes. Can they recreate the ground-breaking film shot-for-shot before our eyes just using their wits and a few props?”

That sounded like my worst school play experiences and a handful of experimental theatre plays, but Remix is totally different.

The back story is as said. It is fifty years ago, 1968, with the events of the Vietnam War, the Cold War, Robert Kennedy, Martin Luther King, assassinations and President Kennedy making appearances on the back screen on the newsreels of the time, but moving on …

It begins in a cemetery, all in real time “the play is exactly the same running time as the film at 90 minutes“ intermission excepted!

Brother and sister Johnny and Barbara arrive to put flowers on their father’s grave. There they are attacked by a zombie. The slowest in the world! Barbara flees from the graveyard to a remote farmhouse in the Pennsylvania countryside …

This continues with the arrival of (Morgan Bailey), and then the horror starts, trapped. Ben and Barbara attempt to seal the farmhouse against zombie attack, “not that zombies are as overpowering as the original film“ and turning it into an Alamo.

The story unfolds using two screens as a backdrop one the original film the other the cast in real-time on stage synced together, filmed by themselves in rotation with the four on stage cameras. It’s complicated, very, but you get used to the choreographed movements, and tune out the off scene movements.

The close up matchbox car scenes and the stick figures recreating the Zombie hoards give it a 1950s B-movie style and gave the audience a laugh. As did the actor holding the car window, you should be getting the style of the play by now! B-movie meets Brass Eye.

The story turns with the discovery of the people in the basement and the power struggles that ensue “I’m the boss upstairs, go and be the boss downstairs.” Mr Cooper “Mat Prendergast” steals the show as the downstairs boss.

Great multi character performances by the cast, especially when they go to the TV presenter cameos, and the use of video backdrops and lighting, with the actors timing has to be seen to appreciate their skills as were the props.

Brilliant play and definitely a must for zombie fans, but also a great entertaining play in itself.

This post was written by John Patterson as part of our South Leeds Goes To The Playhouse partnership.