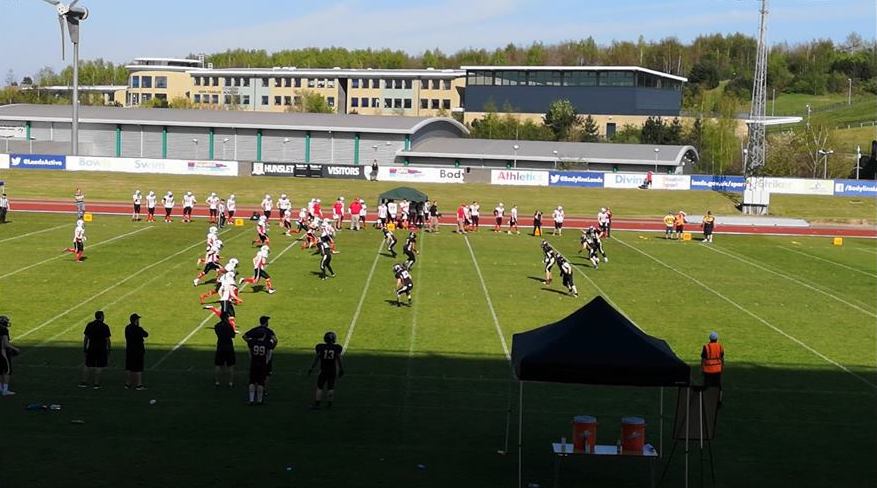 It’s an exciting start of the season for the Yorkshire Rams, the American Football team based at South Leeds Stadium. Yesterday (20 April 2019) they faced the Aberdeen Roughnecks. The Rams have a large number of new players on their roster which will really put them to the test. They will have to really ‘try’ this season to bring everything together and make the playoffs.

As well as the many fresh faces there are a few long-term players returning. Spencer Whybrow is returning for his impressive 31st season, Chris Lawton, the team’s Quarterback and Safety is gearing up for his 11th season. With this amount of experience and strong leadership from coach Dale the Rams are sure to make good headway this season.

Speaking with Stewart Hegarty it’s clear the team is relaxed about the upcoming season and ultimately are aiming for the playoffs later this year, but are going to take each game as it comes and watch the team evolve and develop.

While predominantly a sport associated with male players, the Rams has a unisex team and has men and women playing side by side. I had the pleasure of speaking with Lil-J-Bush who explained that playing the sport alongside her comrades has helped develop and improve her game particularly in the women’s league. As there are different positions to play, for example quarterback, receiver and running backs, people of all different shapes and sizes can play.

“The team is amazing and respect me as an equal member of the Rams.” she said.

Bush is dedicated to the sport and while currently playing for the Yorkshire Rams and Leeds Chargers, Bush is setting her sights high for a spot with the GB Lions. Good luck Lil!

The opening game of the season was a disappointing loss for the Rams with the Roughnecks leading from the first quarter and sprinting to full time with a score of 0-43 to the Roughnecks. But a good game was played all round and the Rams have the rest of the season to pull it back!

If you would like to become involved with the Yorkshire Rams they are always recruiting new players, could you be their new quarterback? Get in touch with them via their social media and find out more.