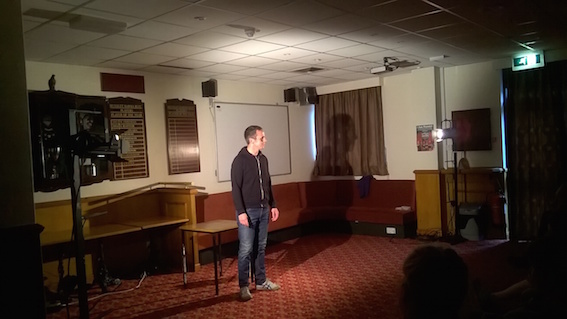 Wow!! – what an experience.

Just got back from the Hunslet Hawk’s Phoenix Lounge after experiencing Rabbitskin, the one-man play put on by the Red Ladder Theatre Company.  “Experiencing” is truly the right word and I was glad that the room was in darkness so that my fellow audience could not see my tears – although I suspect that they will have been equally glad of the darkness.

Tears of laughter were interspersed with tears of poignancy (or was it only me that could relate the tales of Joe’s childhood to my own?) and finally tears of horror, as the final outcome was revealed.

Staged by the same team as Playing the Joker, the story of rugby league commentator Eddie Waring, this drama had no rugby league connection, other than the working class upbringing of the main character in South Leeds.  Nevertheless, the audience at the South Leeds Stadium were captivated by the performance of Paul Fox and his truly inspiring monologue lasting almost an hour.

Red Ladder are committed to performing at small, non-traditional, venues so please get in touch with chris@redladder.co.uk if you are interested; believe me, you won’t be disappointed.

This post was written by Peter Todd using our Create an article for South Leeds Life page.