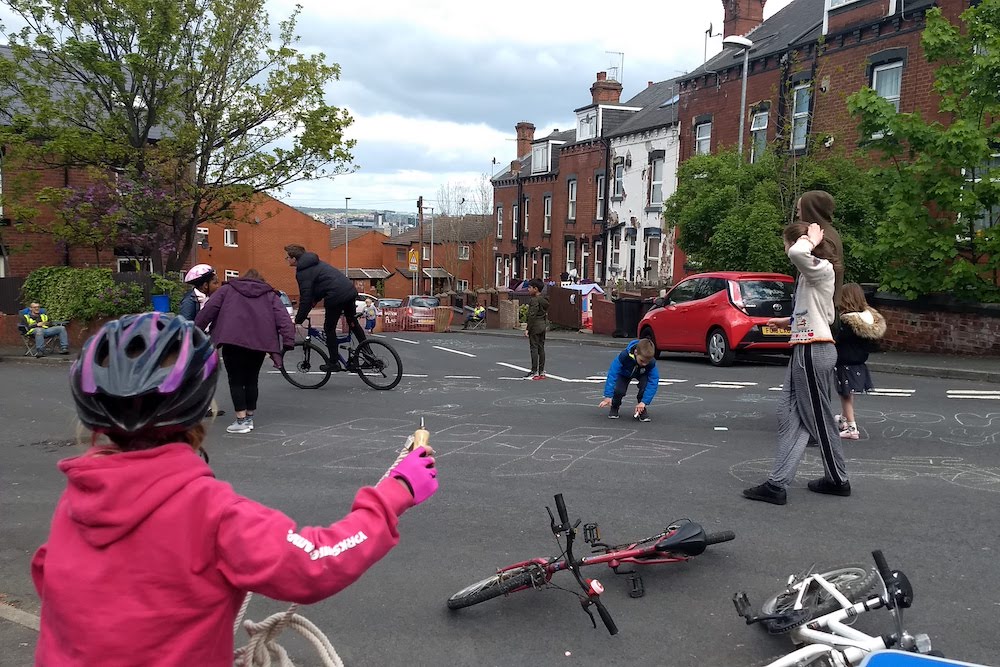 Our street in Beeston Hill has become a place of play and fun by turning it into an occasional Play Street.

How often is it possible for a bunch of children to safely roll down the middle of their own street in a cardboard fridge box donated by a neighbour for them to use? Meanwhile neighbours both with and without children stand around watching and smiling and chatting.

Play streets happen when the council gives permission for temporary road closures for a couple of hours to allow the space to be reclaimed by those who live there. When we moved to our street four years ago there was a group of children who played out together, a bit older than mine and although the street is not extremely busy, there are enough taxis zooming down to make me think twice about letting my children join in.

We live in a street of Victorian terraces and few houses have gardens so play options are limited. I can’t remember where I first heard about play streets but the idea of children’s play taking priority on the street rather than rat-running cars or football parking seemed brilliant.

I called on all my neighbours to see what they thought of the idea (most of whom I hadn’t met before) and everyone was really positive. I applied to the council and we closed our street for play about once a month during summer 2019. It was mostly simple stuff – chalks on the road, football, a big skipping rope. Later in the summer we had a street barbecue and at Christmas time we had a party with fire pits and mulled wine.

“I think play street is a wonderful idea and experience. I live on a busy road, and don’t feel comfortable to normally allow my younger children to play out on the street. The play street scheme is a big hit on our street, everyone grabs a bin [used to block the road], and creates a safe space for all. “It’s lovely to see, adults and kids alike, socialising and playing in our space. Sometimes we do food, sometimes ice pops, it can be as easy as you want. My children definitely benefit from it, it’s good for us all to be friends.”

When we were stuck at home for Covid, many people began to get to know their neighbours, but it felt like we were ahead of the game. Because of the Play Streets we already knew each other, had a WhatsApp group and so on. People look out for each other and the street. When there is fly tipping or other problems, people are able to share information together to try to solve problems.

After an enforced break last year we are hoping we will be doing Play Streets again very soon this summer. We are fortunate in Leeds that the council are really positive about play streets and make it pretty easy to set one up, if the street is deemed suitable. This summer they are particularly promoting it and as someone who has organised play streets in my own street I have been asked to be a part of a group helping others in our area (Beeston Hill and Holbeck) to set up play streets too.

If you are interested in learning more and getting some support in getting something going on your street, please email me catherineepeacock@gmail.com or go to the Play Streets page on the council website.