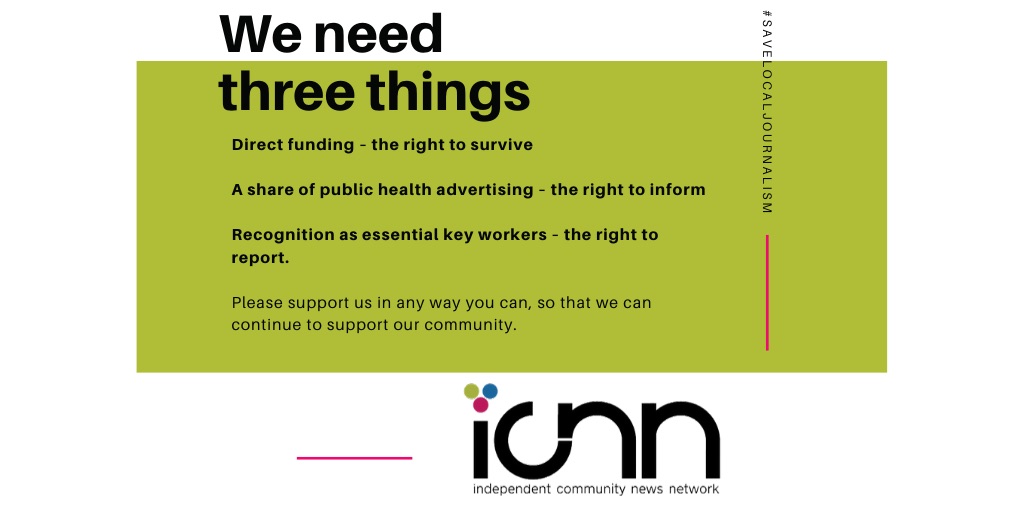 As you can imagine these are very worrying times for our members.

As an organisation, we are now extremely concerned.

This is a time when our members are crucial in ensuring public information reaches communities across the UK to inform and advise about public health.

We fear that, unless we can secure some emergency funding to support small news publishers at this time, communities across the UK will lose their independent press at a time when they need it most.

It is critical for public health that these publications continue to give essential, verified and useful information to the communities they serve.

Many of our members are the only news publishers in their areas, some covering entire counties and cities. If these publishers are forced to close, the UK will be left with many more news black holes which we will struggle to fill again. We have stats that prove, even in areas with lots of local press, some of our members have the most engaged audiences.

On 20 March, in a submission to Government, the News Media Association (NMA) said that the crisis posed a grave threat to some publishers because of sharp declines in advertising and some would not survive beyond the next few months without swift intervention.

The NMA outlined a series of financial and operational interventions which are “essential to ensure news publishers continue to operate,” including:

Committing to divert Government media spend to newspapers (online and print, national and local) to ensure key public information messages are communicated to readers through an immediate and sustained advertising campaign;

We must ensure the independent publishers don’t get left out of any deals made between the Government and organisations under the umbrella of the NMA.

The Independent Community News Network (ICNN) currently has 108 members, and most will be out of business in the coming weeks due to Covid-19.

They are the only ones in our sector who are formally recognised by the BBC and Welsh Government as quality and reputable news publishers, due to our strict entry criteria and the ongoing high editorial standards of our members.

The majority of these news publishers rely on local businesses advertising. That advertising has almost disappeared overnight as businesses are forced to stop trading. Most advertisers have already cancelled, the rest will soon follow.

According to our figures, if ICNN was considered a co-operative media organisation, we would be the fourth largest news organisation in the UK. In addition – we are over a third bigger than the fifth (Archant) and sixth (Tindle), combined.

We cannot stress enough how a little funding will go a very long way with our members. The amount is very small – we are basically talking about covering individual salaries in some cases, to keep an entire publication going. None of the money will go to shareholders or to cover large overheads.

In light of the devastating cuts announced by Newsquest yesterday, it is even more important that the Government includes ICNN members in its plans when considering both Government Advertising spend and when deciding eligibility criteria for funding assistance. Whilst we recognise that efforts are being made to support small publishers across the board, we believe very strongly that ICNN members need to be considered when it comes to receiving a package of support.

Most of our members fall info the sole trader category, of which there is no government support as yet. Very few fall into the small business category, which means they qualify for financial support.

Getting access to any funding or support we can for ICNN members, to ensure they can continue running their publications during this critical time.

Getting access to any Government/Public Health/NHS advertising campaigns, alongside the NMA.

Ensuring ICNN members are included in the list of recognised journalists allowed out to carry on reporting in the event of a full lockdown.

One of our members has already been prohibited from reporting by a police officer, it is critical that we now get ICNN members on an approved list of key workers so they can continue with their vital work.

Forgetting the hundreds of news black holes and total loss of plurality of voice this would create if small publishers are forced to close, it is essential for Public Health during this crisis they remain afloat to serve the communities who need them now more than ever.

Business hibernation is not possible due to the nature of what these news organisations do. Now, more than ever, they need to be growing their output to help connect communities.