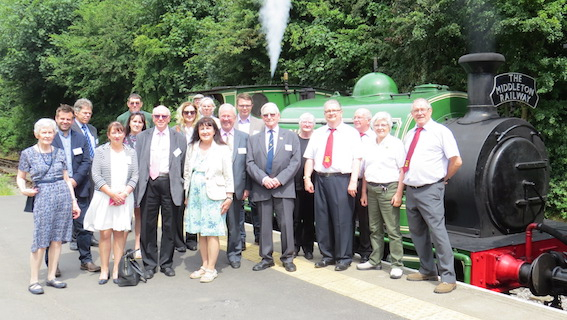 On Wednesday (14 June 2017) the Middleton Railway held a “Chairman’s and President’s Day” to showcase our railway and its achievements over the years.

The guests were given a tour of the facilities and a trip over the entire operating railway, being shown various works undertaken or planned for the future, should resources become available, all aimed at improving the visitor experience.

The annual Model Railway Exhibition will be taking place as usual in the Engine House on Saturday 17 and Sunday 18 June 2017.

The railway will be open from 10am until 5pm each day, and steam passenger trains will be operating regularly between 11am and 4pm on both days. Light refreshments are available as usual in our shop/café.

Admire the models set amongst the real thing in our Engine House and you can travel on a full size steam train. There is also the opportunity (for those 18 or over) to drive a full size locomotive – two different locomotives will be in operation each day. Steam locomotives are now in their third century of operation at Middleton, and we will be operating ‘Driver for a fiver’ on one of ours – when did you last do that at a Model Railway Exhibition?