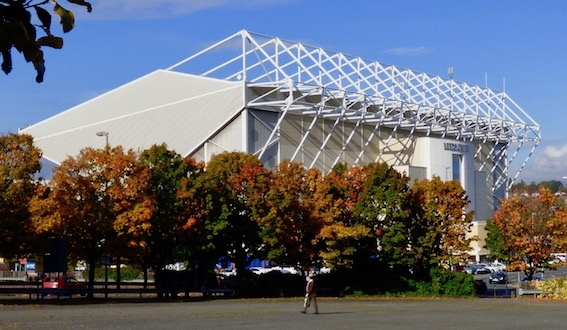 A report recommending that Leeds City Council enter into formal discussions with Leeds United regarding the development of a new club training ground in the city is set to be discussed by senior councillors next week.

If approved by members of the council’s executive board on Wednesday 18 October 2017, the council and club will open talks regarding the former home of Matthew Murray High School in Holbeck, potentially becoming the club’s official training facilities for senior and academy players. The Matthew Murray site which is owned by the council has been disused since the school’s buildings were demolished in 2005/2006.

A separate site at Elland Road’s Fullerton Park which is also owned by the council has been identified by the club as a potential base for a ‘Community Sports Village’. Used also by the academy for weeknight training, this site would become primarily the hub of Leeds United Foundation’s wide ranging sporting and educational programmes and would support the club’s aim to be at the heart of the local community. It is proposed that both the ‘Matthew Murray Training Ground’ and ‘Community Sport Village’ would be designed and delivered to Category 1 status – a requirement of the Premier League for training and academy facilities by 2020. If a provisional agreement is reached for both sites, it is initially proposed that the council, subject to planning approval being granted would enter into a lease agreement with the club for a period of 99 years.

“Leeds needs a successful football team, not just because success puts a spring in the step of Leeds United supporters, but also raises the global awareness of the city and encourages the spreading of the Leeds brand. You only have to look at the success of Leeds Rhinos or the worldwide audience for the Leeds Grand Depart to see the economic boost top level sport gives to the city.

“We’ve already seen very positive moves by the new management at Leeds United, such as the purchase of the ground and bringing Leeds United Ladies back into the fold. That demonstrates an ambition on the part of the club to give the people top class football and to play a full part in the life of the city as a whole.

“Bringing the Matthew Murray site back into use as a training facility in inner city Holbeck makes sense for the club’s business, but also sends a powerful message about the club’s inclusivity and awareness of its potential to do good in the local community. The development also ties in with the wider regeneration work the council is already doing in the recreations next to Matthew Murray.”