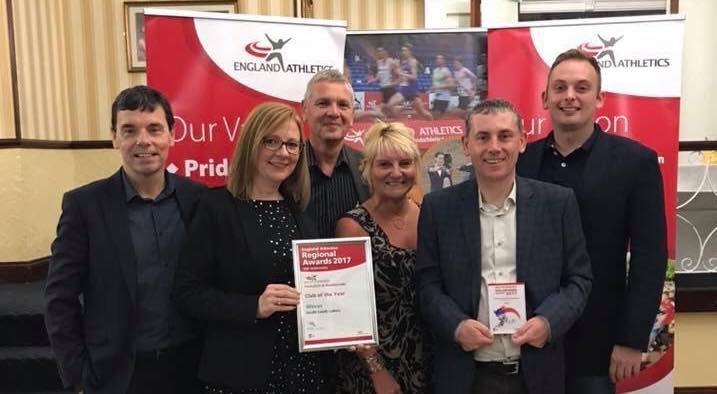 Congratulations to South Leeds Lakers who picked up Club of the Year for Yorkshire and Humberside at the England Athletics awards ceremony earlier this week.

They were nominated by club member Sharon Mann who attended the event at Kings Croft Hotel in Pontefract with 5 other members of the Lakers.  The group were founded in February 2015 and have gone from strength to strength over the last 2 years.  They affiliated to England Athletics in 2016 and have seen their numbers grow on a weekly basis, with over 70 runners pounding the streets of Beeston most Tuesday evenings.

“Inclusivity is the key to our success. Everyone is welcome and we accommodate for the “elite” runner who wants to enter races and receive coaching sessions as well as the social runner who wants a steady trot and chat to de-stress. And its free!”

“We are overwhelmed to win the award but just as heartening was reading the lovely words that Sharon put in her nomination. The success of the group is undoubtedly down to the supportive nature of everyone involved.  Sharon’s quote of “No one gets left behind” sums us up perfectly.”

South Leeds Lakers meet every Tuesday at Beeston Coop at 7pm (Coaching sessions are held on Thursday evenings).  For anyone who has never run before then why not try the Couch to 5k programme which starts on October 17?  Everyone is welcome.