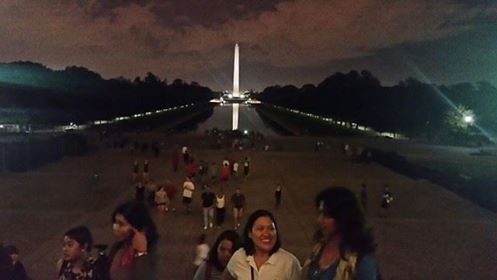 Two young people from South Leeds have just returned from Washington DC where they have been representing the UK as student ambassadors.

Krissie Murray from Belle Isle and Rabbi Mbata from Hunslet are part of the Bridge To Employment project. They applied for the three year scheme when they were in Year 11 at The South Leeds Academy. Krissie now studies at Elliott Hudson College and Rabbi at Notre Dame Sixth Form College.

In America they joined up with eight other students from around the globe for a three day alliance building and training session. Amongst the activities they undertook was the Escape Room where each group had one hour to finish five challenges in order to win the key and escape from the room. Krissie’s group managed it with just 1 minute 36 seconds left on the clock.

Another exercise looked at identities and how we think, feel, see, etc. This involved colouring in a ‘Flat Stan’ cut out, Krissie and Rabbi naturally put their Stan in a Leeds United tracksuit and before the session was over Rabbi had taught the song Marching On Together to the whole group.

“It was an amazing opportunity” said Krissie “and I’ve made friends for life. It was nice to see how easily we all got along, we clicked straight away.”

Rabbi said he had learned professionalism from the experience. “I used to slouch and use a limited vocabulary. Now I’ve learned how to present myself in interview situations.”

There was time for some sightseeing too. Rabbi was very impressed with the Washington Monument, which is lit up every night. They also visited the Smithsonian Museum where Krissie bought NASA’s astronaut ice cream.

This trip was just a small part of the Bridge to Employment programme. As we reported in October 2016, the project gives students the opportunity to experience a range of science, technology, engineering and mathematics (STEM) subjects, in partnership with Johnson & Johnson companies such as DePuy Synthes.

They both hope to go back to America, to see their new friends, explore new cities, or help on future Bridge To Employment projects as experienced alumni.