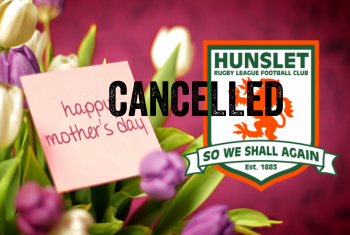 Hunslet RLFC have announced that this weekend’s League 1 fixture against Whitehaven is now postponed to a provisional date of Sunday 30 April. The club has apologised for the short notice of the change to this fixture and criticised the RFL for its decision.

The postponement is at the direct instruction of the RFL who have advised that under operational rules last weekend’s postponed Challenge Cup tie between Whitehaven and Oxford now has to take precedence.

Hunslet say they have spoken to Whitehaven who would have been more than happy to replay the Cup tie in midweek, leaving our league fixture unaffected. Sadly they could not secure agreement to that offer with their opponents.

“This is a real blow to us. In fact the RFL did not even have the courtesy to tell us directly, leaving Whitehaven to contact and explain the situation, which to me is unacceptable. They no doubt knew the reception they would get. We have worked hard to promote this game and have over 80 people booked in for a Mother’s Day lunch and entertainment. They will be massively disappointed that the event has now had to be cancelled albeit through no fault of the Club.

“I have left the RFL in absolutely no doubt as to my anger at this decision but unfortunately they are just not prepared to listen. As a supporter owned Club it is incredibly difficult to drive income streams and decisions like this do nothing to help. The decision also means we now have a month long gap between home games which hardly helps build momentum. It’s a shame we find ourselves in this situation when there’s an obvious solution that the RFL aren’t prepared to take.”