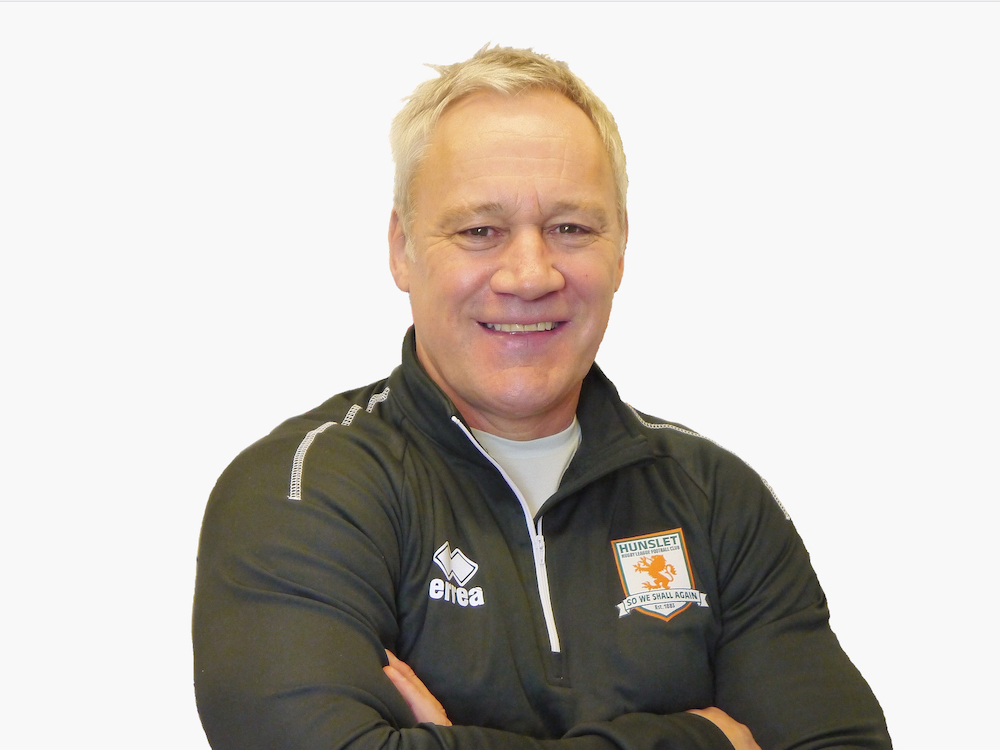 With Hunslet RLFC sitting on top of League 1 after winning four out of four games we asked Coach Gary Thorton for his thoughts on the season so far.

What’s been most pleasing about Hunslet’s season so far?

“Obviously winning games regularly is very pleasing for all the players and coaching staff. But what has pleased me most as a coach, is the improvements we are making week by week. We knew we had weaknesses last season in our goal line defence, and we have worked hard to address that this season, and I think that has been our biggest improvement area.

“We have only conceded on average just over 10 points per game so far, and if you can keep teams to within 10 points you are always in with a chance of winning games. We must stay level headed though, and realise everyone wants to knock us off top spot now. We will be a target for all our opposition, but that’s a great place to be!”

Despite being given the number 6 and 7 shirts, last year’s half back pairing of Sanderson and Southernwood seem to have been second choice this year to Dean and Nicklas – how do you see it?

“They are only squad numbers. We have to pick who we think are the best combinations and who complement each other and the team best. All four have their own individual attributes and are stronger in some areas than others. Reece and Nicko became available later in the recruitment process and Joe and Cain had already signed, but it was too good an opportunity to miss out on two quality players not to bring them in.

“It has created competition for places which is good, and with not having an A team, it is harsh on those not playing, but we have to do what we think is right for the team. Nicko has great organisational skills and puts us round the park really well, and Reece has some flair about him and sees things others don’t. That said when Cain and Joe get their opportunities I’m sure they can step in and do just as good a job.”

Some might say that you’ve had an easy start to the season, are you looking forward to your trips to Whitehaven and Oldham?

“Doncaster away is never easy (they beat Workington at home), and Coventry have beaten Newcastle, so I think that’s a bit of flippant statement. You can only beat what’s in front of you, and we are taking it game by game. This is a tough division and I think results have already shown anyone is capable of beating anyone in this league.

“Yes we have some tough games coming up, but it’s about building confidence and momentum going into those games, and trying to pick them off one by one. First we have Halifax to deal with in the Challenge Cup before we start thinking about Whitehaven or Oldham. But I’m sure those teams will be worried about facing us in our current form.”

It’s very sad that Richard Moore has had to retire, how will he be missed at Hunslet?

“It is always sad when a player has to retire through injury. Richie was a huge signing for us and we were hoping he could take us to the next level with his experience and quality. He was a brilliant guy to have around the place and was a big voice in our changing rooms, and a great help to the younger guys passing on his knowledge and experience. So obviously he is going to missed.

“But his health and wellbeing have to come first and we wish him a speedy recovery so he can get on with the other things in his life that he enjoys doing. He has been a terrific servant to the game he loves, and it’s a shame he wasn’t a bigger part of our season.

“But we have to move on and someone else has to step up and fill those shoes. Luckily we have some other experienced players in Robbo and Emmett who have stepped up in terms of leadership in the front row, and we have a brilliant captain in Straff who keeps everyone together and leads by example on and off the field. People like Richie are very hard to replace but I know he wants us to do well and succeed and will be following us I’m sure.”