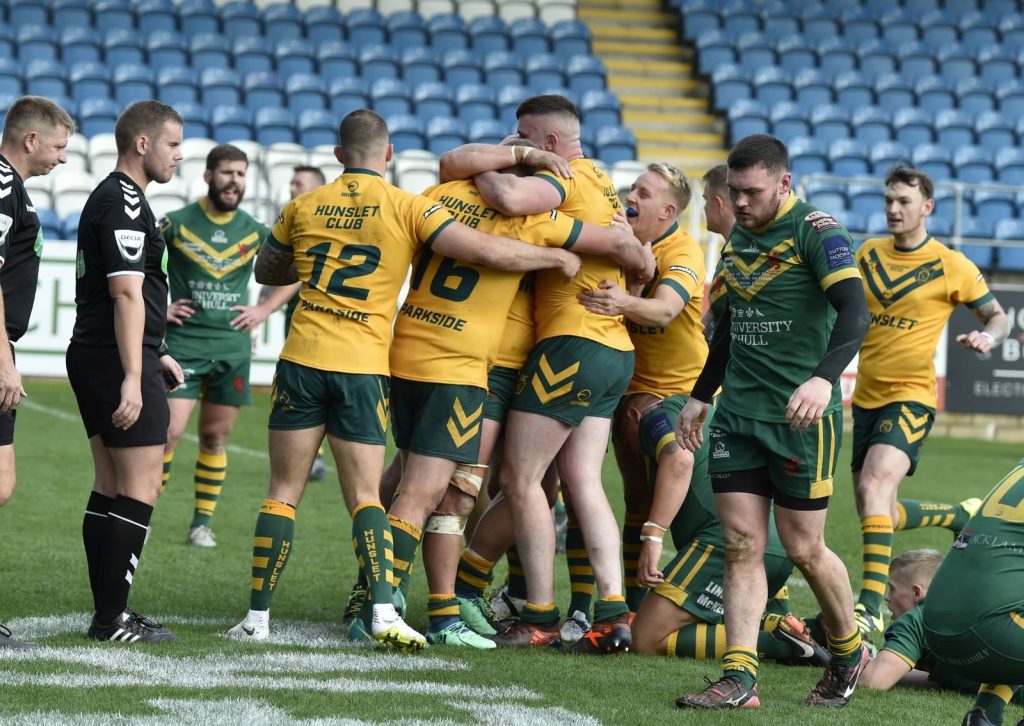 Hunslet Club Parkside finished off a brilliant season with victory in the Kingstone Press National Conference League Grand Final by 26–18 over West Hull at Featherstone Rovers’ L D Nutrition Stadium on Saturday afternoon (6 October 2018).The win confirmed their position at the top of the amateur Rugby League game.

Earlier on in the day north Leeds side Milford Marlins narrowly missed out on promotion to the Premier Division for the second season running, losing out to Leigh Miners Rangers in golden point extra time by 22 – 26.

Topping the Premier Division by a clear 14 points and undefeated in all 22 league games plus victory over the same opponents in the qualifying semi-final a couple of weeks ago, Saturday’s victory made it a perfect season, following on from having topped each Division of the NCL for four successive seasons, a truly remarkable achievement for the south Leeds outfit!

In Saturday’s final West Hull took an early lead with a penalty on 11 mins, but that lead was short-lived as Andy Hullock sent prop forward and skipper Jamie Fields over for a trade mark try a couple of minutes later, grounding the ball under the posts despite attention from a number of defenders. Jamie converted his own try and also added a penalty for a ball steal on 21 mins to take the score to 8–2.

The second try of the first half went to one of the side’s star performers on the day No 9, Jamie Bradley who drove over from short range on 38 mins, this time converted by Danny Rowse. A well deserved first half lead of 14-2 was built on solid defence across the team, not allowing their opponents to add to their early penalty, and a massive effort from the whole forward pack who continually made the hard yards to dominate the battle up front.

The third quarter belonged to determined opponents West Hull who scored two tries to bring the score to 14-12, but Hunslet Club Parkside’s ascendancy was restored on 67 mins when second row Ben Shulver latched onto a beautifully delayed pass from Man of the Match Andy Hullock to gallop over the line from 10 metres out. Danny Rowse’s conversion attempt shaded a post but 18-12 soon became 24-12 when a perfectly weighted kick from Hullock put Connor Squires over out wide. Rowse converted this time and added a penalty goal to take the score to 26-12. West Hull completed the scoring with a well worked try converted from the touchline with only two minutes to go, but that score failed to take any of the gloss off a well-deserved victory.

This was a characteristic whole team performance from Hunslet Club Parkside and it’s not easy to single out stars. That said McShane, Bradley, Shulver and Hullock were stand out performers in this writer’s eyes.

I asked Skipper Jamie Fields to offer his thoughts to South Leeds Life having had a couple of days to reflect on the scale of the team’s achievements this season:

“Yeah it’s just starting to sink in what we’ve achieved as a club not just as a group, something we started in the first week of January mate … and then Jason Robinson (former Hunslet Boys Club and Hunslet Parkside junior who went on to have a brilliant rugby career representing Wigan and Great Britain at rugby league and Sale, England and the British Lions in the 15 a side code) presenting our shirts before the final was another lift for us … knowing where Jason has been through his career and talking us through his big days … then to turn up and watch the game too was massive for the boys.

“Saturday was a tough game. We knew we had to be at our best to win but we’ve spoken about winning becoming a habit and it was just another cup final, the same as the previous 23 games. West Hull taking their two points lead … we knew they’d take any points on offer as we don’t give many opportunities throughout any game. I thought the first half was pretty much perfection apart from two or three errors and a great platform for the second half to build on.

“I’m mighty proud of the bunch of players I’ve led this year and the club we’ve led as a team. I’ve said it many times before that there’s a dozen leaders in that dressing room and the goals we set ourselves are high but achievable. We never said at the start of the year we’d go unbeaten that’s ignorant of any other team in the division. A top four place was the goal and then week after week you start to aim higher and higher, but have to still remain grounded in how you conduct yourselves and that’s testament to our three coaches too,  Martin Rowse, Sam Thorpe and Paul McShane who’ve been amazing. From Richard Groves who runs the water to Glen Rawson the Chairman then Dennis Robbins and Andrew Beadnall, all involved at the Hunslet Club, and all the other influential people involved, they all have big roles and without them it’s not possible. I can’t stress enough how much this is a club effort as well as the squad.

“We will aim to go and back it up next year now, but for the meantime we will enjoy our success!”