Newly promoted Hunslet Club Parkside lifted the National Conference League Challenge Trophy with a brilliant victory against Premier Division opponents Wigan St Pats. The all-conquering south Leeds side playing down the infamous Mount Pleasant slope in the first half of the game built up a 10 – 0 lead before defending well and progressing the score to 22-0 in a near faultless second half performance to go one better than last season when they lost out at the final hurdle. 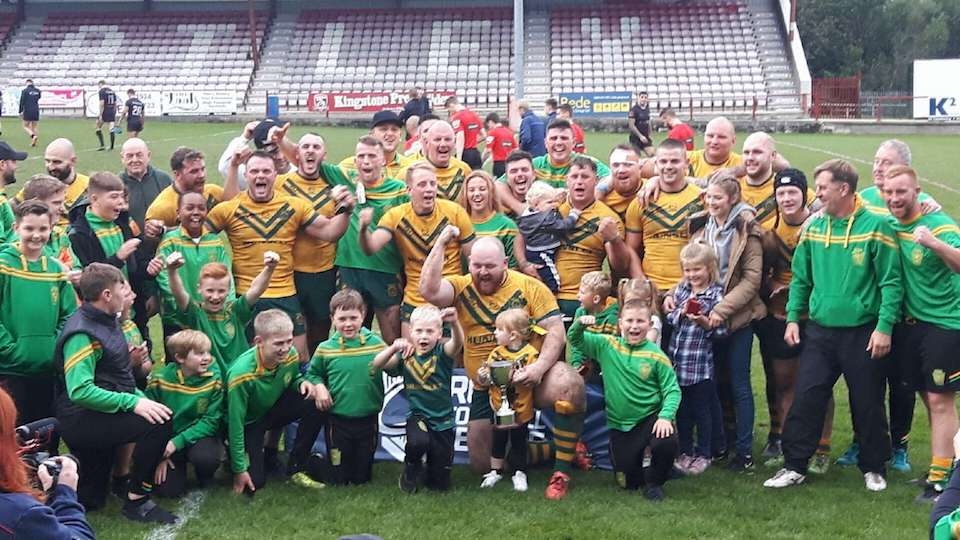 The Old Boys opened the scoring when wing Danny Harrison caught an inch perfect kick from stand off and man of the match Andy Hullock on 9 minutes after having a try disallowed in the opening exchanges when skipper Jamie Fields went over under the posts only to be brought back for an obstruction. Fields’ conversion attempt was wide of the target.

The rest of the first half was a nervy affair with both sides making errors and the eventual clear winners unable to get into top gear on attack. Full back McShane looked like he could break the defense when he had the chance to run with the ball and it was he that eventually scored Hunslet’s second try just before half time when he was first to another excellent kick to touch down under the posts. Just before McShane’s effort wing Omar Alrawi was unlucky to have a try disallowed when a forward pass was ruled by the officials.

The opening points in the second half went to Andy Hullock with a penalty goal to increase the lead to 12-0. Playing up the slope now Hunslet Club Parkside’s keenness in defense needed to be as good if not better than it had been in the first half and it was just that – not allowing Wigan St Pats to get into their stride.

Hooker Jamie Bradley eased the nerves of Hunslet faithful when he scooted over from dummy half on 66 minutes which, with Hullock’s conversion, took the lead to 16-0. The late sin binning of Danny Harrison on 75 minutes didn’t prevent centre Jack Kirmond from scoring after good handling and an excellent conversion from out wide by Hullock completed the scoring.

“Going into the game we fancied ourselves and that’s not being big-headed. We have worked hard for what we have accomplished this year and the coaches –all three – Macca (Paul McShane), Sam (Thorpe) and Martin (Rowse) have bought into the same thing all year.

“First half running at 50% completion we knew we had more. The score before half time lifted us too and killed them a little I thought. Second half we came out firing and Jamie Bradley and Andy Hullock lead from the front. The introduction of Danny Rowse at half time changed the game I thought!

“We spoke about making a name for ourselves and about letting the Premier Division know what’s coming next year and I think we achieved that today!

“We’re ready for next year and we’re ready to win the League next week away at Milford who will want to ruin our party but hey ho, one week at a time!

“Two matches to go and the Treble – BARLA Cup, National Conference Trophy and First Division title – is on. I’m extremely proud of the boys and our club. We’re a family not just a team”

As Jamie says victory away at Milford next week (Saturday 30 September at Leeds Rhinos Academy, Bridge Road, Kirkstall LS5 3BW, kick off 2.30pm) will bring the club the First Division title to go with their two cup victories… why not get along to cheer the boys, who are surely south Leeds’ most successful sports team at the moment, to victory!