Over 100 people packed into St Matthew’s Community Centre on Saturday morning (27 February 2016) to put their views to Council bosses and Police officers.

The meeting to discuss the ‘managed sex work area’ was organised by local councillors and chaired by Cllr Angela Gabriel. Most of the residents were opposed to the managed area and felt it wasn’t working. 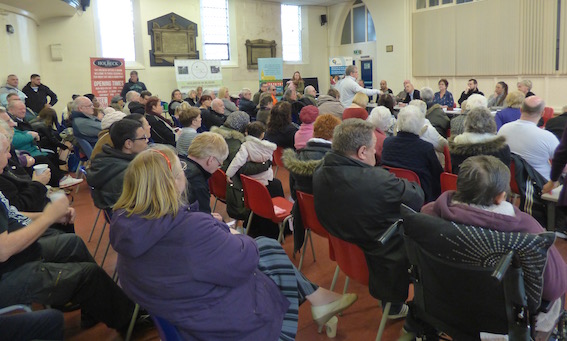 The area is supposed move the problem away from residential areas to industrial areas and operates between 7pm and 7am. Within the area sex work is tolerated. But residents complained that women were continuing to work on their streets and at all hours.

Complaints included about being repeatedly woken up at night, children being propositioned in the street, gardens being broken into and being harassed by punters.

Superintendent Sam Miller, head of the Safer Leeds partnership said that Holbeck had suffered the problem of street prostitution for ten years.

“Enforcement, in isolation, has not worked. It has just created a cycle of offending.” Women who are arrested, are fined by the Courts and go back on the street to pay the fine.

She said the Police were talking to the Courts about using other sanctions that addressed the women’s drug addiction and mental health problems. She is also pressing for more CCTV in the area and Automatic Number Plate Recognition (ANPR) equipment to identify men entering the area for sex.

One resident complained “They drive up and down my street and you can’t get their number because their number plate light is out. We know why they’re here, they’re not tourists!”

Neil Evans, LCC Director of Housing and Environment, said that the approach was driven by residents’ complaints over many years.

“This is a genuine attempt to minimise the impact of prostitution on your lives” he said.

He went on to say that ten years ago their were 200 street prostitutes across the city, now it’s down to a hard-core of 40. “These women have problems, chaotic lifestyles and aren’t making rational economic choices.”

Residents asked why the law wasn’t being enforced. Supt Miller said “We have not decriminalised anything, but we need to be flexible and use tactics that make a difference.”

Inspector Jon Arrowsuch from the Inner South Neighbourhood Policing Team said he had been given resources to increase the Police presence in the area since 15 February. A minimum of three police officers would be permanently in the area everyday between 11am-9pm.

He recognised the problems of reporting via the 101 number and said a dedicated line was being set up for Holbeck residents to report problems. The number will be released next week and we will publicise it here on South Leeds Life.

Not all residents were opposed to the scheme. One man said “It’s better than ten years ago, without this policy it will go backwards.” Another said “I don’t mind the managed area, but it must be managed.”

Others were still angry commenting: “You don’t live here and you don’t care”; “people are here today because we’re fuming. This problem has got to stop.” and “We want actions not words.”

Cllr Gabriel said there would be a further public meeting in three month’s time to review the situation. In the meantime the Council and the Police would review the details of the scheme including hours and whether parts of the area were too close to residential properties.