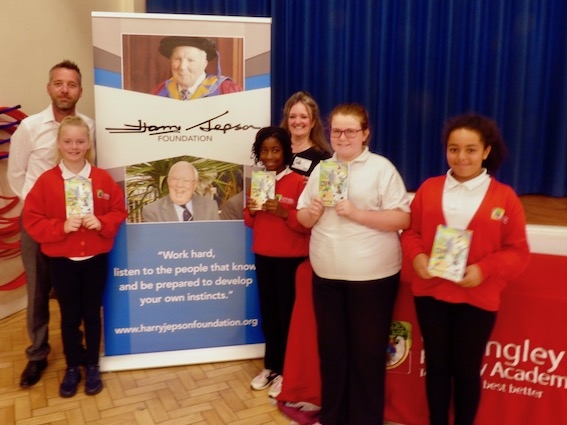 Rugby legend Harry Jepson OBE’s grandson Phil was on hand at Cottingley Primary Academy on Friday (21 July 2017) to hand out prizes on behalf of the Harry Jepson Foundation.

Harry, who died last year aged 96, taught at the school between 1954 and 1963. Pupils in year 6 were invited to enter a poetry competition to mark the launch of the Foundation. The four winners attended the official launch at Headingley Stadium ahead of the Rhino’s match against Catalan Dragons on 10 March this year.

On Friday they received books and book tokens from Phil Jepson and fellow Foundation trustee Ros Caplan, from Philip Howard Books in Roundhay.

“Harry had a great love of books as well as rugby, which he passed on to the children he taught. I’m sure he would have approved of these poems” said Ros.