Hunslet Hawks secured a top 8 finish in Kingstone Press League 1 with a thrilling fightback against North Wales Crusaders at the South Leeds Stadium. Their fifth win in six games, the Hawks came back from 18-4 down in a great game where Hunslet showed real quality for a large amount of time. 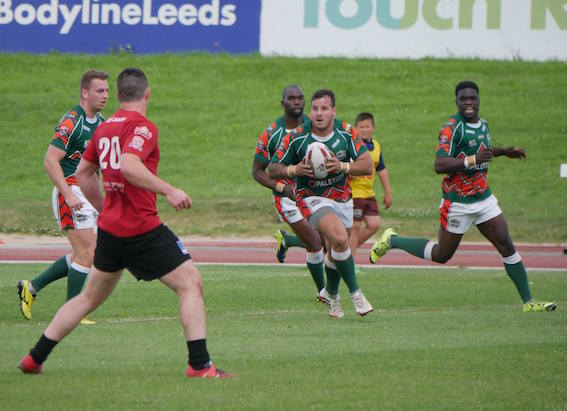 The first half started with North Wales totally on top, three early tries giving them a good lead. But some great attack meant that Hunslet ended the half in front 22-18. Hunslet continued the dominance they showed late in the first half into the second, scoring two tries and a drop goal fairly early on, putting them into a 35-18 lead. Two Crusaders tries towards the end of the game made for an anxious finish, Hunslet edging it out deserved winners.

As the match kicked off, both sides and supporters looked keen in what was set to be a hugely important match, the tension showing in a nervy start to the game. The first points of the game came when a penalty created space for Crusaders’ Billy Brickhill to break through and on the next tackle centre Alex Thompson broke through staggered defence to score a neatly converted try. Not long later, on the 13th minute Ryan Smith received a pass from a break to put him in for the Crusaders’ second try in quick succession. It was again converted to the noisy Welsh fans’ approval to make it 12-0 to the visitors.

Hunslet regained possession from the kick off though and a set on the opponents’ line led to a Daniel Williams try, which went unconverted. That took the score to 4-12. An error by Hunslet led to Andrew Oakden scoring a long range try for the Crusaders on the 25th minute, again converted by Tommy Johnson to make it 4-18.

On the half hour mark the game seemingly turned on its head with Hunslet substitute Michael Haley going over for a try. Simon Brown converted to close the gap to 8 – the score 10-18. Hunslet’s strong attack brought them to near the visitors’ line on most sets and a couple of minutes after Haley’s effort, superb rugby took Ayden Faal over, a try finely converted to mean the Hawks trailed by just two points.

On the stroke of half time half time fan favourite George Flanagan scored a trademark scoot near the line putting Hunslet into the lead after a successful kick on the hooter, the score 22-18. The try marked the end of an incredibly exciting first half where both sides showed their capabilities and 40 points were scored.

The second half started with a good set from the Hawks, North Wales Crusaders finding themselves dropping out, and some good drives saw Hunslet quickly on the try line. George Flanagan scooted over from dummy half, and after it was expertly converted the Hawks led 28-18.

On the 55th minute, a great 40-20 gave Danny Ansell the position to score, showing a dummy to make his way over. It was yet again converted by Simon Brown, meaning the Hawks led by 16, the scores standing at 34-18.

On the hour mark, Simon Brown kicked a close range drop goal to take it to 35-18. A short period of the game followed where no points were notched before a good kick was collected by Rob Massam who scored for North Wales on 72 minutes, narrowing Hunslet’s lead to 11 points- the scores on the boards 35-24.

And a few minutes later a scrappy break secured a try for Kenny Baker, setting up a grandstand finish with Hunslet winning by just 5. That was the way it ended, Hunslet Hawks winning a thrilling encounter by 35 points to 30.

After the game coach Matt Bramald talked of how Hunslet showed great spirit in victory. He also said that they blew North Wales away when they stuck to the structure and should’ve had the game ‘done and dusted’ with 20 minutes to go.

Reporter’s Man of the Match: George Flanagan scored two of his trademark tries and had a massive impact on the game.