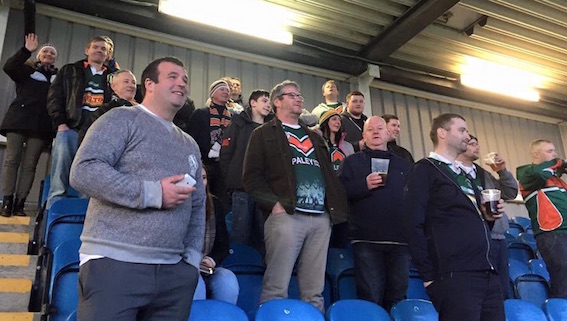 Featherstone Rovers showed their class with a dominating second half performance to beat Hunslet 24-10 in the Hawks’ second pre-season friendly.

Hawks’ new head coach Matt Bramald made a good start against his old club in front of a crowd of 1,045 at the Big Fellas stadium, but Rovers scored three second tries to overcome a spirited Hunslet performance.

Rovers took the lead after six minutes when Jamie Cording’s scored the first try of the game. Kyle Briggs added the conversion to give Featherstone a 6-0 lead.

In the 24th minute, Lee Mapals scored following a flowing Hunslet move to cut deficit to 6-4, but Simon Brown was unable to make the conversion.

George Flanagan followed up with another try, this time Brown converted putting Hunslet 6-10 up. Tempers got frayed and Channing (Rovers) and Darby (Hunslet) were sin-binned after mass brawl just before half time, but the Hawks took their lead into the break.

After the break Featherstone took control and racked up 18 unanswered points in the second half.

Jack Ormondroyd went over in the 42nd minute and Kyle Briggs kicked the extras. Danny Craven scored in his first match and the match was sealed on 66 minutes with an excellent 70 yard try by Kyran Johnson. Kyle Briggs converted all three tries.