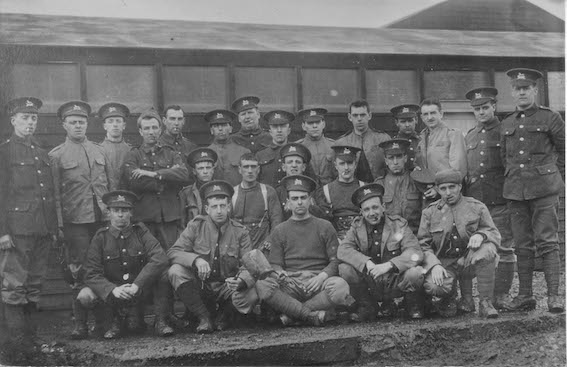 Back in July we reported that the Wright family had been reunited with their grandfather’s World War 1 medals, thanks to Conrad Buckley from Middleton Primary School. Intrigued by his story, we took the case to Julie Holmes who runs the Ancestry Group at BITMO’s GATE.

Walter was born in Hunslet on 20 January 1899. We don’t have his full war record (yet) but it is likely he lied about his age when he signed up. This was a common occurrence and in response to public opinion the Army held an amnesty ahead of the Battle of the Somme in July 1916. Young men under 18 could ‘hand themselves in’ with no repercussions and be returned to Britain. Few took up the offer.

Walter’s unit was the West Yorkshire Regiment 21st (Wool Textile Pioneers) Battalion, one of the so-called ‘Pals’ battalions made up on volunteers from a particular area. Pioneer battalions were the equivalent of sappers or engineers and the 21st saw action in the Battle of the Somme. Their job was to follow the infantry attack and create communication trenches across no mans land. Although the Division took its first objectives, it came under heavy machine gun cross fire and had to withdraw sustaining high casualties.

With Julie’s help we will try and find out more about Walter Wright’s war record and bring you more of his story.

If you want to find out more about your family history, why not join Julie’s Ancestry Group which meets every Monday from 10am-12pm or 1-3pm at the BITMO’s GATE centre, Aberfield Gate, off Belle Isle Road. The sessions are free but if you sign up to any websites such as Ancestry.co.uk you will have to pay your own subscription fees.

Julie says “It’s a fascinating process and you are bound to find out something about your family that you didn’t know. But beware, it is rarely as straightforward as portrayed on the TV programme Who Do You Think You Are?”