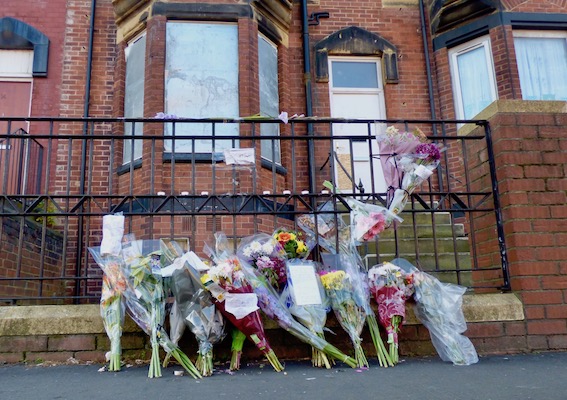 Beeston woke up on Friday 14 October to the tragic news that 17 year old Sophie Smith was dead and her six week old son, Harrison, was an orphan.

Police were called to an address in Tempest Road, Beeston, shortly before 5am following a call from the amublance service who were attending to a 17-year-old woman with serious injuries.

Sophie Smith was pronounced dead on arrival at hospital and Morgan Banks (18) has since been charged with her murder.

Now the community has rallied round to support the family, first raising over £2,000 for Sophie’s funeral via a Just Giving page. That was followed up with a cake sale at Dewsbury Road Tesco on 22 October.

Now a fundraising evening has been organised by Leanne Mitchell and Leoni Boyes. The event takes place at the Tommy Wass pub on Dewsbury Road on Saturday 5 November, starting at 5pm. As well as food, fireworks and face painter, there will be a prize raffle and an appearance from an X Factor contestant.

Back on Tempest Road, flowers, candles and messages have been left outside the house by friends, family and well wishers.