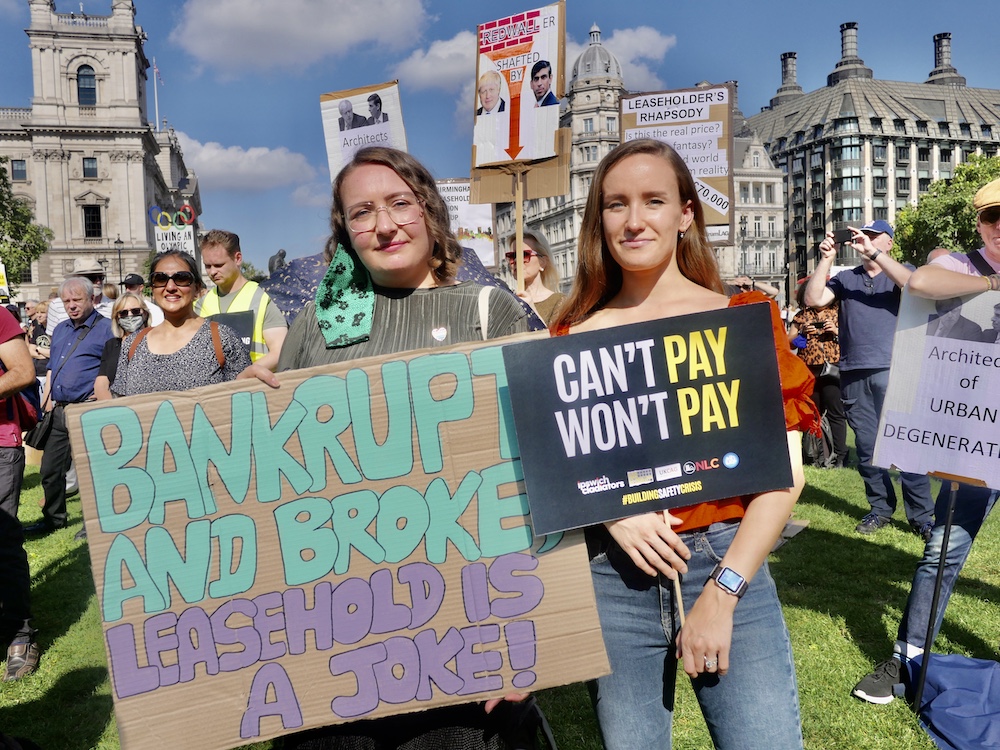 It was January 2020 when I first found out that my flat had been identified as not having the right fire safety measures in place.

At first the worry about the risk of fire was overwhelming. Like many people, I had watched those heart-breaking images on the news of the fire in Grenfell Tower that took 72 lives and couldn’t imagine the terror of waking up with the building below me engulfed in flames.

In the weeks immediately after the Grenfell disaster I received assurances from my freeholder – that my building didn’t have any of the same material that made the Grenfell fire spread so fast. Unfortunately, as the years have gone on since Grenfell attempts to try and ensure that a fire like that doesn’t happen again have uncovered all sorts of defects in tall buildings.

This includes a range of unsafe materials used to clad the outside of buildings, flammable materials used to insulate buildings, and not following building safety codes to make sure the right fire-retardant barriers are in place between apartments and floors. And as the extent of these defects have been uncovered, the focus of the issue has shifted from making the buildings safe, to who should pay to make that happen.

Like many people who own flats on a leasehold arrangement – I was shocked to find out that legally the person who can be made to pay is me. Even though when I bought my flat it was checked to meet regulations, even though I’ve paid all my service charges and insurance ever since, and even though I don’t actually own the building – I just own the lease for my flat inside the building.

The most common reaction I get when I explain to people about how I’m caught up in this scandal is “that can’t be right” quickly followed by “surely the Government will step in.”

Well, in my case, it’s been 20 months, so far it’s cost me the best part of £15,000, my flat still remains a fire risk and not a single bit of work has yet been done to make my home safe. My current estimated share of the bill to make it safe stands at £112,594, which is more than the value of my flat.

So, it felt right that I added my voice to the many hundreds of leaseholders, many from Leeds, who attended the Leaseholders Together protest in Parliament Square on 16 September 2021.

The purpose of the rally was to try and hold the Government to the promises that it has made over and over again – that leaseholders like me “shouldn’t” have to pay to put right the combination of builders’ errors, developers who cut corners and the failure of regulation to make sure safety standards were met.

It was great to hear politicians from all parties voice their support for leaseholders like me, facing huge bills for problem we didn’t cause.

Conservative MP Iain Duncan-Smith gave his backing for recouping the money from those who caused the problems:

“Those who are responsible, those who have profited significantly, those who built with materials that were illegal at the time … they are the ones who should pay.”

“I will keep talking [about this issue], we will keep voting on this issue … until there’s justice for leaseholders.”

Labour MP, South Leeds’ own Hilary Benn also gave an impassioned speech about fixing this problem fairly, highlighting one of the failures of the current Government policy to only partly fund some saying:

“You can’t half fix a fire risk … funding half of the problems is just wasteful nonsense”.

He also paid tribute to the work of campaigning groups – in particular, to Abi Smith from Leeds Cladding Scandal who was the first person in Leeds to bring this issue to his attention.

However, it was particularly hard to hear from fellow leaseholders who have been hit hard by this scandal. Nearly everyone talks about the mental health toll, but for some it has been acute physical and mental harm – some have been hospitalised, some have taken their own life.

Most people are facing huge financial problems, some have sold their homes to cash buyers for a fraction of their worth just to be able to get out and move on. And one Leeds resident, Hayley, spoke of her heart breaking choice to accept bankruptcy.

A year ago, she had a one bedroom apartment in the city centre, bought as an affordable home, but after being made redundant during the pandemic she couldn’t meet the mounting bills for interim fire safety measures.

“Now I’m bankrupt and living in my dad’s spare room – he has health problems and needs to move to a smaller place, but he can’t move on because I’ve got nowhere else to go.”

It’s hard to know if the protest will force Government to revisit how it is handling the building safety crisis. But, stories like Hayley’s, like mine, like thousands of people in Leeds and hundreds of thousands up and down the country are getting louder, and harder to ignore.

Hope is in short supply just now, but we are crossing our fingers that a new Secretary of State might re-look at the issue and see what’s very clear to us: we shouldn’t be forced to pay because the builders cut corners, the developers took risks and the regulators turned a blind eye.

Photo: Hayley Tillotson and Abi Smith at the Leaseholders Together protest outside Parliament