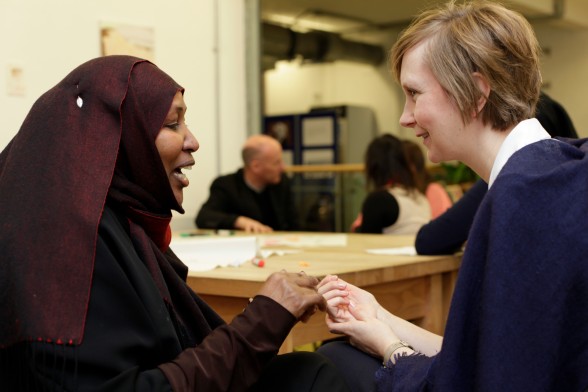 Real People, Honest Talk is a project designed to bring people of different cultures and backgrounds in a community together to honestly and openly discuss real issues that are affecting them in their community. Run by Near Neighbours and piloted in Luton and the Black Country, the project has recently come to Leeds with one group representing Beeston Hill and Holbeck.

There were four groups representing different areas of Leeds which met several times before the Big Conversation event to discuss issues relating to themselves and their local area. A Youth group was formed with representatives from different schools and Universities ranging from the age of 16 to early 20s and they said that the first conversation was difficult because of the differences between the participants but by the second session meaningful and productive conversations were being had.

Once the groups had chosen the issues they wanted to discuss they them formulated speeches to be presented to a panel at the Big Conversation event. The panel included representatives from Leeds City Council and West Yorkshire Police who listened to the speeches and issues raised by the participants.

Issues raised by the groups included but is not limited to conversations around racism in the community and schools, education and trying to support today’s children to be tomorrow’s leadership, mental health and particularly that of men and issues around Immigration and Refugees being inaccurately or unfairly portrayed in the media.

The local group representing Holbeck raised four key issues which did not include the Managed Approach but the group recognised in their speech that they are not ignoring the issue. The Managed Approach has existing groups and discussions taking place to deal with this issue and that they want to let these forums happen and give them a change to petition for meaningful and positive change first before they become involved with them.

The biggest issue raised and discussed was around private landlords and housing conditions which is currently poor in some areas of Beeston Hill and Holbeck. Two anonymous case studies were presented to the panel which described living conditions and landlords who were falling massively short of acceptable. They also raised the issues of the buses in the area being unreliable and sometimes not showing up altogether which is a common complaint of people when you speak with them. It is exacerbated by the number 1 bus route being cut in half for the next few months and not following its normal route straight through town.

Finally, they raised the issue that Holbeck does not currently have a supermarket other then Venus which provides some choices and necessities, but it specialises in Turkish, Mediterranean and Continental foods which isn’t always what people are looking for. They have already contacted Aldi, Lidl and Asda with a view to working with them to bring such a supermarket into the area.

Once the speeches were over there was an opportunity for the panel to respond to the issues raised and then to further discuss them with the groups after the event. There were meaningful conversations afterwards and the participants from both sides seem committed to making meaningful changes in their areas.

One participant who was pleased with her group commented that;

“I have been able to connect and talk to people I would never have approached or spoken to otherwise. The open and honest nature of our groups has helped this and I am really hopeful we can do something great for our community and give a voice to people who are too afraid to speak up.”

If you would like to know more about this project or become involved with a future conversation take a look at the Near Neighbours website here.

Photo from Just Act taken at another Near Neighbours event