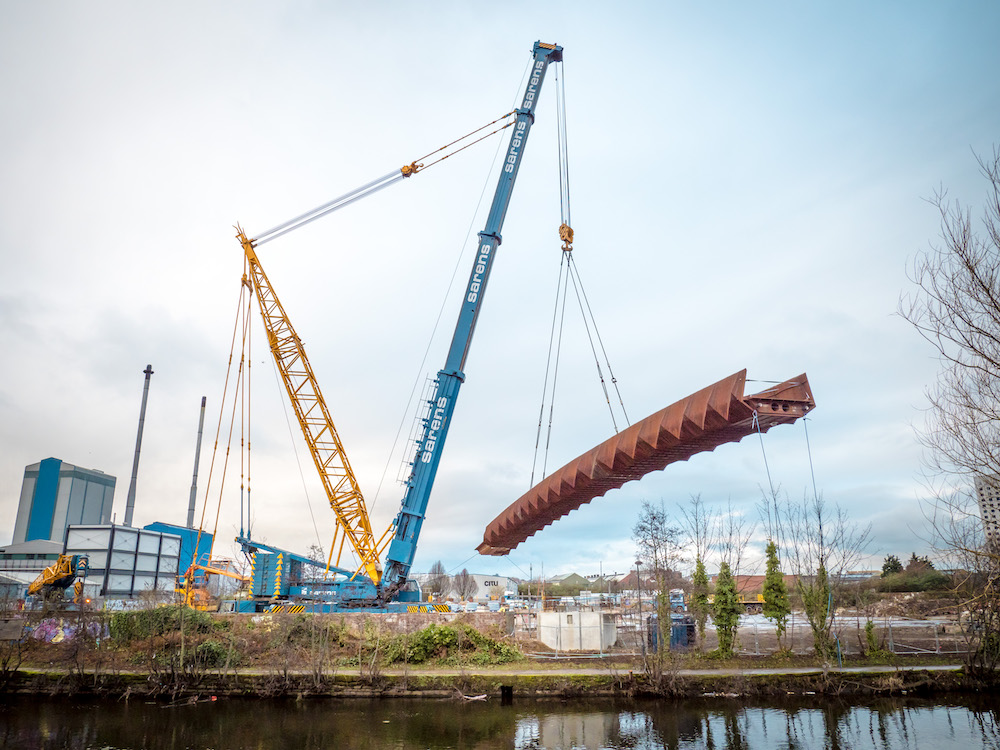 Sustainable urban developer Citu has reached a major milestone this week with the installation of a 50-metre pedestrian bridge, providing a vital link across the River Aire from Leeds’ South Bank to the city centre.

The £1.5m eye-catching  structure was lowered into place using a 1000-tonne crane and will link Citu’s Phases One and Two of the Climate Innovation District either side of the River Aire, as well as providing crucial connectivity to communities in Cross Green and Hunslet.

Thanks to the distinctive steel structure, pedestrian routes into the city centre will be halved from 20 down to just 10 minutes, allowing a healthier, safer journey along the River Aire. Cyclists are also catered for, in line with Leeds City Council’s highways policy on new infrastructure.

As well as creating an integral and important link for the city, the 3-metre wide bridge has been engineered to accommodate Leeds City Council’s planned £40m district heat network, over the river, all part of the South Bank regeneration project.

Citu is committed to investing long term in the wider sustainable regeneration of the South Bank. The district heat network isn’t required for the homes in the £125m Climate Innovation District due to the airtightness and low energy needs of the innovative timber-framed design, but it will offer both existing and future developments in the area the opportunity to benefit from the Council’s flagship district heat network which will harness heat from the Recycling and Energy Recovery Facility (RERF) at Cross Green.

“This is a huge milestone not just for the Climate Innovation District but Leeds South Bank as a whole. The bridge will act as a catalyst for social and economic change at Hunslet Riverside and the wider South Bank by providing a crucial physical link across the river, as well as being a real eye-catching landmark that local residents  can be proud of.

“Citu’s whole ethos is to offer a model of how to build zero carbon neighbourhoods that also provide healthier, smarter and better-connected cities. The Climate Innovation District is one of the UK’s leading example of this and the bridge is a central pillar – literally – of this successful  philosophy.”

“The Climate Innovation District is one of most exciting developments in the UK and is totally transforming the South Bank area of the city.

“When it is completed the new bridge will connect communities on both sides of the River Aire, open up a healthier walking and cycling route into the city centre as well as paying tribute to the industrial heritage of the area.

“We’re committed to funding projects which make a real difference to peoples’ lives and this is a fantastic example of how we can strive to be a cleaner, greener city region where investment benefits everyone.”

To date, loan investment has helped launch the development of more than 90 hectares of land (the equivalent of 168 football pitches) including building almost 700 new homes and creating 800 jobs. Loan repayments have created an ongoing investment fund to support economic growth and job creation across Leeds City Region.

The bridge will be officially opened later this Spring after the first residents have moved into their homes at the Climate Innovation District. The District will feature more than 520 low carbon Citu Homes including apartments and houses, alongside leisure, offices, public realm and green community spaces.

For more information on the Climate Innovation District, go to www.citu.co.uk