Awards of up to £500 are being offered by Time to Change Leeds to fund activities to help put an end to mental health stigma and discrimination as part of World Mental Health Day today (10 October 2017) activity in the city. 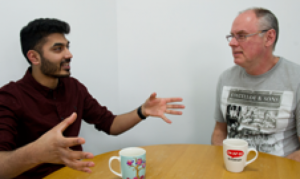 Time to Change Leeds was launched in March as one of the first Time to Change regional hubs, which are partnerships of local organisations and mental health champions committed to changing local attitudes and behaviours towards people experiencing mental health problems.

To celebrate World Mental Health Day and launch the fund scheme, Time to Change Champions will read their own pieces of poetry and work written about their experiences of mental health and mental illness at the Old Red Bus Station on Vicar Lane from 4:30pm. They have been working with performance poet Michelle Scally Clarke, who will also be performing a piece of work on the subject of mental health and stigma.

The event marks also mark the launch of the Champions Fund which provides money for people to run activities that engage others in conversations about mental health. The first round of applications for the Champions Fund opens on World Mental Health Day and runs until Thursday 30 November 2017.

Time to Change Leeds Champions are part of a nationwide social movement of people who use their own experience of mental health problems to challenge mental health stigma and discrimination. They do this in a number of ways including running activities and events where they speak about their own experience to break down barriers and encourage mutual understanding and respect. The current campaign encourages people to ‘Be in your mate’s corner’, encouraging people to suport their friends.

“This is a great opportunity to get involved in fighting mental health stigma. We’re making great progress and this is a real chance to be part of taking that fight forward.”

“Leeds has a strong record of challenging mental health stigma. Partners across the city have worked hard to spread positive and supportive messages and I’m delighted Time to Change are providing this opportunity to bid for funding to support the end of discrimination against mental ill-health.”

Abbie, a Champion for the national Time to Change campaign, said:

“It was ingrained into me from a young age that depression didn’t really exist and if it did it was only adults who had a bad life who got it. And it was a weakness if they had it. These misconceptions had an effect on me when I was suffering as they prevented me from getting help. It made me realise that I needed to do something to stop others from thinking and feeling the same way, and that’s why I started campaigning with Time to Change.”

To find out more about becoming a Time to Change Leeds Champion or how to apply for an award, visit: www.leeds.gov.uk/time-to-change

To be eligible, applicants must have signed up to become a Time to Change Leeds Champion and:

The ‘Be in your mates corner’ campaign details are at www.time-to-change.org.uk/what-you-should-know/be-your-mates-corner