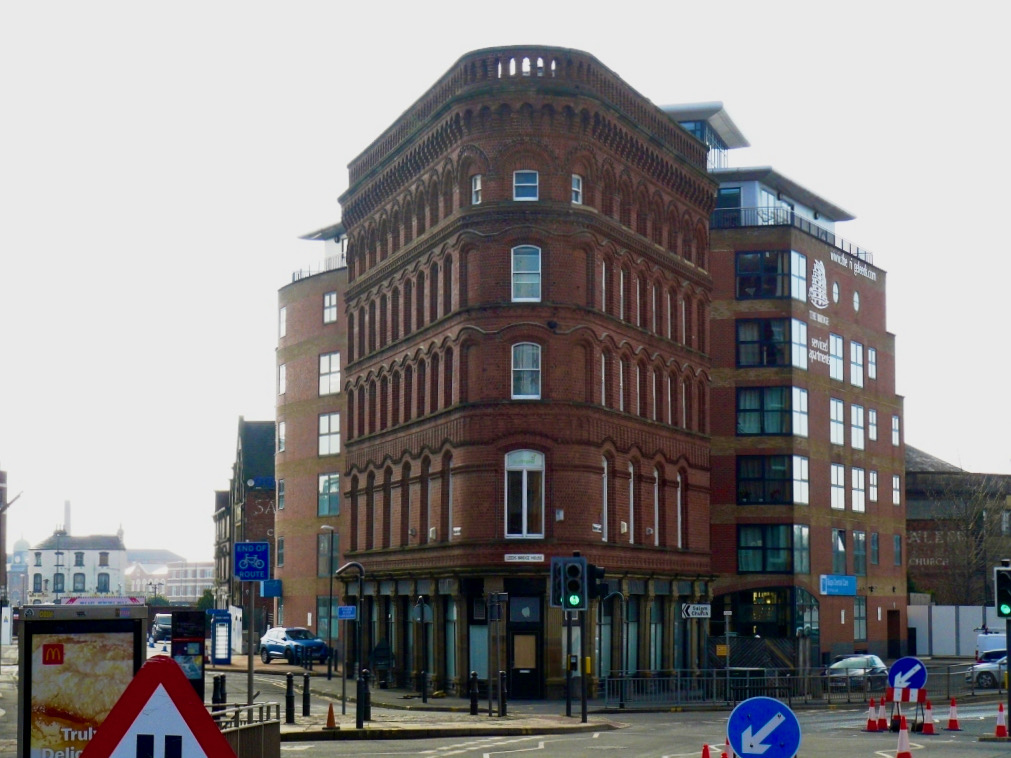 Having walked south over Leeds Bridge there is a building of interest to be seen ahead of us, Leeds Bridge House at the junction of Hunslet Lane (Leeds Lane to Hunslet folk) and Hunslet Road and at its rear Waterloo Street.

This is a triangular building in the shape of a flat iron like that heated on a fire or stove (this is earlier by some 20 years than the famous American one in Manhattan).

The area was very fashionable in the 18th century but by the end of the 19th century when this building was erected its social status changed as it became more industrialised. When Hunslet Road (the New Road to residents in the area at that time) was cut through the district in the 1870s to ease congestion on Hunslet Lane, this odd piece of land of 223 square yards was sold by the Corporation.

It was bought as a lot in a general auction of development land south of Leeds Bridge by one John James Cousins, the Manager of the Exchange & Discount Bank on Park Row for £1,338 in 1879. Cousins lived at Allerton Park, north of the City. He hired architects Messrs. Adams & Kelly also of Park Row to design a building to fit the shape of this unusual plot and Leeds Bridge House was completed in 1881.

The building had a cast-iron frame and cellars that extended to the edge of the pavement outside. Stone Pilasters with decorated capitals frame the windows on the ground floor and each floor above is distinguished with individual patterns and geometrical designs in brick, while the top is crowned with Machicolations (a row of small projecting arches) and a parapet. Inside a stone staircase with glazed white bricks ran from the basements to the top floor, access to this staircase is by a door at the rear, and four hoists carried goods to all five levels.

This building opened on the 3 September 1881 as the Leeds “People’s Cafe” to provide breakfasts, dinners, teas, and suppers at a price everyone could afford. It also offered overnight accommodation, having 30 bedrooms, at a cost of 4s (20p) per week or 1s (5p) per night, and a hot and cold private bathroom for 3d (1p).

The scheme’s promoters were sure that people would use places like this but the fortune of this building seems to prove otherwise because it was reported on the 26 September 1888, after only seven years of trading, that the business was being taken over and the name was changed to the Cobden Temperance Hotel.

The Temperance Movement which began in England in the 1830s was popular in many northern towns and in 1897 there were no less than 30 Temperance Hotels listed in a Leeds Directory. But even the high hopes of this takeover were soon dashed because by June 1895 the ground floor had been converted into shops and the upper stories had fallen into disuse. Cousins died in December 1897 when the main body of the building was still unoccupied.

This state of affairs lasted until November 1901 when the Executors sold it to Nelson & Company Limited, Tea Merchants of Louth in Lincolnshire, but the cycle of failure persisted because that Company was put into liquidation by a Creditors’ Petition on the 7th February 1905.

At various times dress and mantle makers, a dentist, and a manufacturing stationers operated in the building until 1910 when Tunstall & Company, Manufacturing Chemists moved in, they also had a wharf across the road at the riverside.

During the war my father fire-watched from this building. The firm remained here until 1960 when Leeds Bridge House was purchased for demolition by Leeds City Council to make way for a proposed motorway extension. Another act of council vandalism in South Leeds thankfully avoided!

However, the building was reprieved and was refurbished in 1981 and reopened as an office development. It is currently tenanted by charitable organisations so, in a way, the place has returned to its philanthropic roots.

The Adelphi Public House once occupied a position roughly where Leeds Bridge House now stands, this was at the time of the Theatre in the Lane and before the creation of Hunslet Road when it was moved to its present location.
The building still survives in 2021 let’s hope that it does for many more years to come.