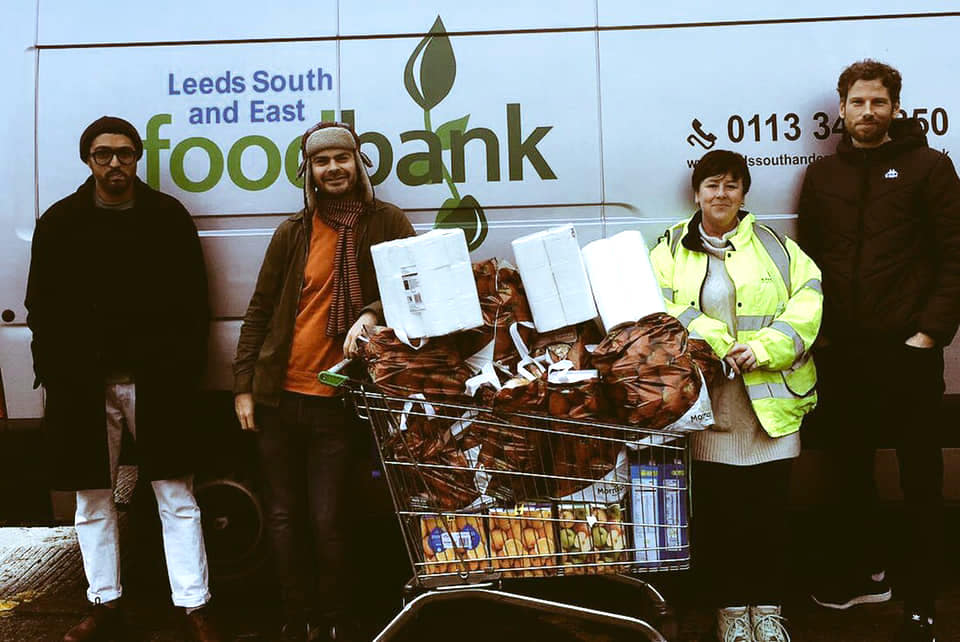 This Saturday (8 December 2018) Leeds United Supporters’ Trust in partnership with two local Leeds food banks are asking football supporters attending the game against QPR to bring desperately needed food and hygiene items to ensure the foodbanks can give parcels out to families that need emergency supplies over the festive period.

The drive has been supported by players and celebrity fans The Kaiser Chiefs. Barry Douglas brought donations from the players on Tuesday, then on Thursday Simon, Vijay and Peanut from the Kaiser Chiefs brought their donation to the South & East Foodbank’s warehouse on Lenton Drive in Beeston.

In December 2017 the Trussell Trust provided over 159,000 three-day emergency food supplies to people in crisis and with referrals to foodbanks in December increasing year on year, this Saturday the supporters’ trust aims to hold its biggest food drive since launching the initiative at all Leeds United home games back in October.

The food collection point is outside the East Stand, just by the Bremner statue and since its launch generous Leeds United Fans have donated over 1800 meals to families across Leeds just from the last three home games.

The Leeds United Supporters’ Trust is encouraging fans to bring enough items to Saturdays collection to ensure the foodbanks have enough meals to donate emergency food parcels across the festive period at what will be the toughest time of the year for some of these families. Supporters can also pledge cash donations if they can’t make the game online here: https://bit.ly/2DZSSzw.

The foodbanks are running low on the following essential items:

Last year alone the two foodbanks provided food for 18,563 people, consisting of 11,662 adults and 6,901 children across the city.

The foodbanks are also looking for any volunteers who wish to help support their match day collections, if you are interested in helping you can contact:  info@leedssouthandeast.foodbank.org.uk

“Since the launch of the foodbank initiative back in October, our generous supporters have already donated over 1800 meals. With families on universal credit not getting any payments before Christmas the foodbanks expect to see an increase in emergency food parcels. If every Leeds United fan attending the game brought at least one food item that would see the foodbanks have enough product for the entire festive period.”