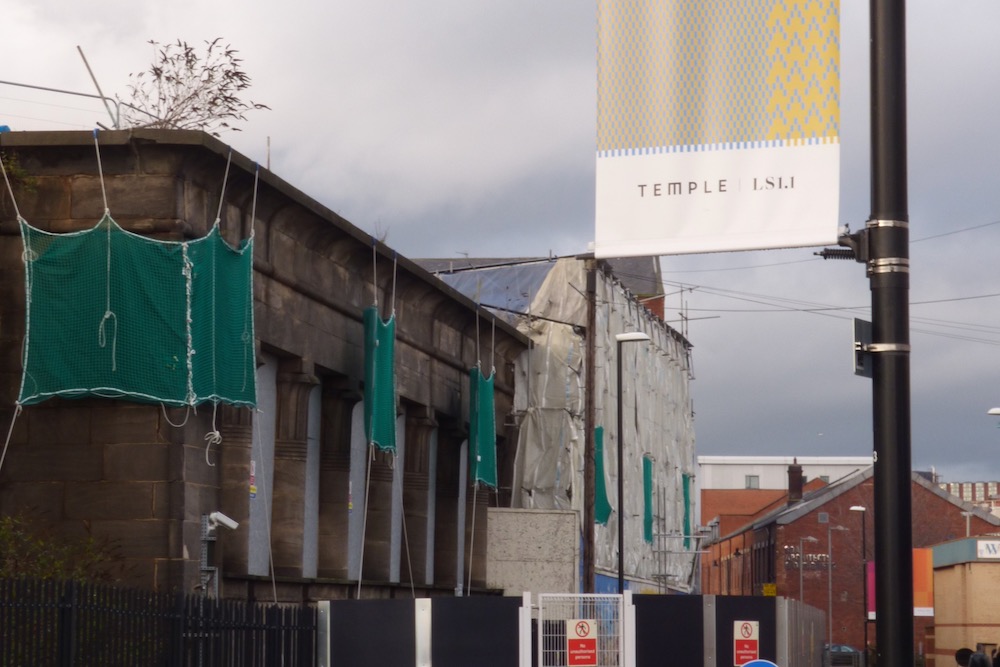 Can I start by saying that I really like CEG as a developer. I’m sure they make a pretty penny for their investors, but they also take local communities seriously and really try to engage – which often isn’t easy for corporates.

I don’t know a lot about their development at Kirkstall Forge, but I like their approach to training and apprenticeships – Forging Futures. I like the fact that they responded positively to Leeds Citizens new campaign, South Bank for South Leeds.

I don’t have any problem with their plans for their ‘mixed use developments’ (flats, offices and shops) on a group of sites around Water Lane and Globe Road in Holbeck. I’m impressed that they were prepared to take on the money pit that is the iconic Temple Works. And I don’t mind that they are badging the area as ‘Temple’, but …

I can see how great it sounded in the marketing focus group meeting. It’s not in LS1, but it’s like a souped up, funkier, more high techversion of LS1. It echoes Internet 2.0, it’s a development, it’s does so much more. I’m sure it will go down very well with the people who CEG are selling and leasing to, but not so much with existing community.

I know that the term ‘South Bank’ makes many of our readers’ hackles rise, but I actually think it’s a useful name. It’s certainly a lot shorter than saying “those parts of Holbeck and Hunslet, close to the river that were characterised by heavy industry that’s now gone.” And given that there are a large number of developments in the area all being built in a relatively short period of time and the area needed a detailed planning framework, ‘South Bank’ is fine by me.

But that doesn’t mean that The Tetley art gallery or Ruth Gorse Academy are no longer in Hunslet, nor that the Temple development isn’t in Holbeck.

I’ve also spent quite a lot of time debunking the urban myth that the LS1 postcode will be extended south because ‘the posh folk’ won’t want to live or work in LS11 (or LS10). My understanding is that the Post Office think the LS1 postcode is too big (in terms of volume of mail) already and certainly wouldn’t countenance expanding it. Of course, Royal Mail’s been privatised since I started debating this, so who knows what money might buy?

However another strand to my argument was that big companies like Asda, Eversheds and Ernst & Young had no problem with an LS11 postcode. And that still stands.

A lot of South Leeds is physically cut off by the motorway, railway lines and the remaining derelict sites. I believe CEG when they say they want to connect Temple with the existing communities, so don’t put up a psychological barrier by badging the area as not really in LS11.

Come on CEG, drop that dot, that full stop, and show some pride that you’re making homes and offices and public spaces in LS11.

One Reply to “South of the River – The LS1.1 Postcode Blues”