A hundred people came along to The Hunslet Club last night (1 June 2016) for a lively and good-natured debate on the European Union Referendum organised by South Leeds Life.

The panel included of Hilary Benn, Leeds Central MP and Shadow Foreign Secretary; and Graeme Tiffany, an independent education consultant, arguing to remain in the EU. They were balanced by Austin Mitchell, former TV presenter and retired MP for Grimsby; and Luke Senior, to UKIP candidate for Leeds Central, both arguing to leave the EU.

Gerald Jennings from Land Securities (owners of the White Rose and Trinity shopping centres) and Chair of the Leeds Chamber of Commerce completed the panel and remained neutral. Peg Alexander from MADE in Leeds TV chaired the event.

Questions submitted by audience members covered the benefits of remaining or leaving; controlling immigration; and investment in the north of England. The discussion aired the important arguments on both sides and although dominated by the panel, some very pertinent points were made from the audience.

Gerald Jennings spoke about business’ need for certainty and access to skilled workers from across the world, but Austin Mitchell worried that with unrestricted immigration from the EU Britain was becoming a low skill low wage economy. Luke Senior described the EU as a “customs union in decline” that swallowed tax payers money. Hilary Benn said that Britain already trades globally and it’s not a question either the EU or the rest of the world. 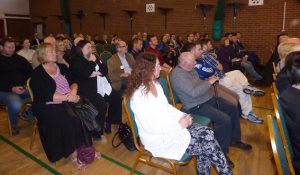 A member of the audience who described himself as a civil engineer said he could find the skilled people to build the roads he was working on. Gerald Jennings was worried that immigration policies, such as the Australian points model “can’t be turned on and off like a tap” as needs change.

A woman, originally from Germany, asked “I am a skilled worker that you all say you want to come to the country, but I wonder if I am welcome here? If you vote to leave the EU should I stay in the UK?”

A Labour supporter who was “leaning towards leaving” said the economic arguments of the remain side were all geared towards business and the middle classes. “How does that help people in South Leeds who are worried about schools and the health service?”

Peg Alexander conducted straw polls at the start and close of the debate. The audience was split roughly 35% remain, 35% leave, 30% undecided at the start. There was little change at the end, perhaps there are still more questions than answers at this stage.

Speaking after the debate, audience member Becky Dalton said “I really enjoyed the debate. I felt it was helpful in highlighting key issues, particularly those around trade negotiations and immigration.”

Another member of the audience Amy Green said “It would have been great to get through more questions and have more audience interaction. The debate made me more determined to vote leave. The remain arguments were too quick to jump on current government policy. This referendum isn’t about party politics, but the future of the UK as a whole.”

South Leeds Life has organised a second event on Friday 10 June at 7:30pm at Arts@Trinity in the city centre where the debate will continue.