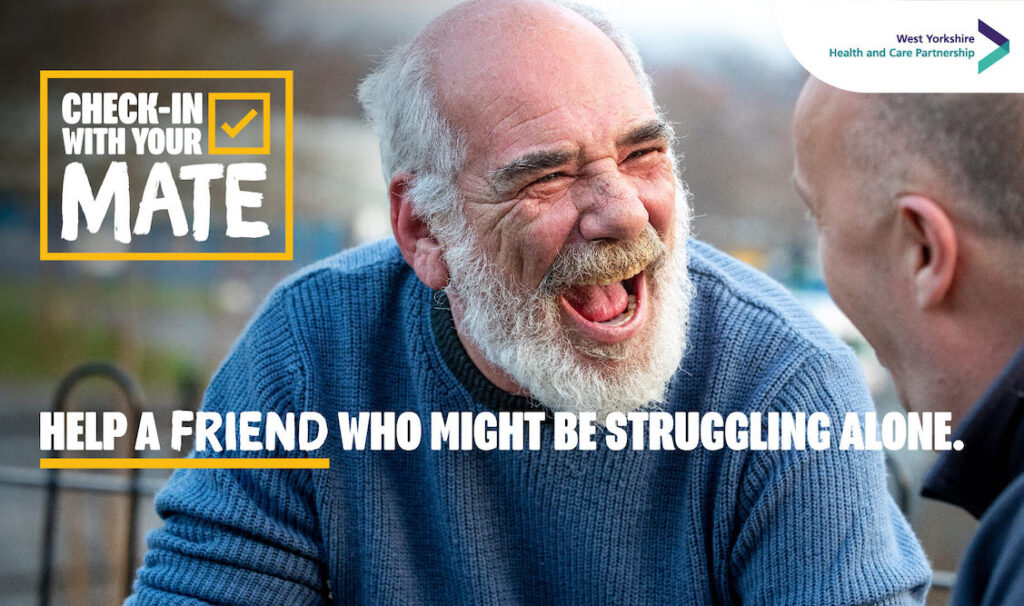 West Yorkshire Health and Care Partnership (WY HCP) is launching a new campaign on Monday (16 May 2022) to create awareness around male suicide across the area and is urging everyone to get involved.

The campaign, which builds on the Partnership’s national award-winning staff suicide prevention campaign ‘Check-In’, aims to promote a wellbeing culture by normalising the conversation around suicide and mental health as well as providing communication assets, links to credible sources such as the life-saving Zero Suicide Alliance training, and signposting to local support.

The campaign aims to raise awareness of the risk factors that may lead to suicide, inspiring people to start conversations about mental health with the men in their life at home, in the community and at work. It sets out practical help we can all give when checking-in. Messages include:

Developed with local men and built from their experiences, the resources can be used publicly in various places – in person and virtually,  such as What’s App groups, on Facebook and Instagram, in workplaces, community groups and elsewhere at staffcheck-in.co.uk/campaign-toolkit/males  from Monday 16 May.

This priority area of work is one of WY HCP’s ten ambitions set out in their five-year plan.

Jessica Parker, Project Manager for WY HCP Suicide Prevention programme, believes the campaign will play an important role in the conversation surrounding suicide, and could potentially save lives. Jess said:

“I’m urging everyone to get involved in this life-saving campaign and would encourage everyone to check in with the men in their lives to ask if they are ok. WYH HCP Suicide Prevention Strategy has developed strong momentum around making suicide prevention everyone’s business. We all have a part to play in combatting stigma and identifying men in our lives who are going through struggles and ask them if they need help.”

Surinder Rall, Service Lead for West Yorkshire Suicide Bereavement Service, says it is essential that we all know the warning signs of suicide:

“I lost both my father and my uncle to suicide. So, I speak from experience when I say that we should all work together to combat the stigma and talk more about suicide. To achieve our target of zero suicides in West Yorkshire, we must continue to talk and ask each other about mental health and suicide. That’s what the Check-In campaign is all about.”

“While people at risk of suicide may try to hide how they are feeling, they often give out warning signs. You might notice changes in their behaviour or be aware of events in their life that could be affecting them. By knowing what to look for, having the skills and confidence to have a conversation and provide support, you can make a huge difference to someone’s life, and their family. I’m urging everyone to get involved so they know the signs and how to respond. You can also start straight away by doing the online training provided at www.zerosuicidealliance.com“

All partners in West Yorkshire – health, care, voluntary sector and beyond, are encouraged to download the free resource, such as posters, social media messages and films to use in their organisation, place of work, teams or at home among friends, family, and community.  All are available at staffcheck-in.co.uk/campaign-toolkit/males from Monday 16 May.