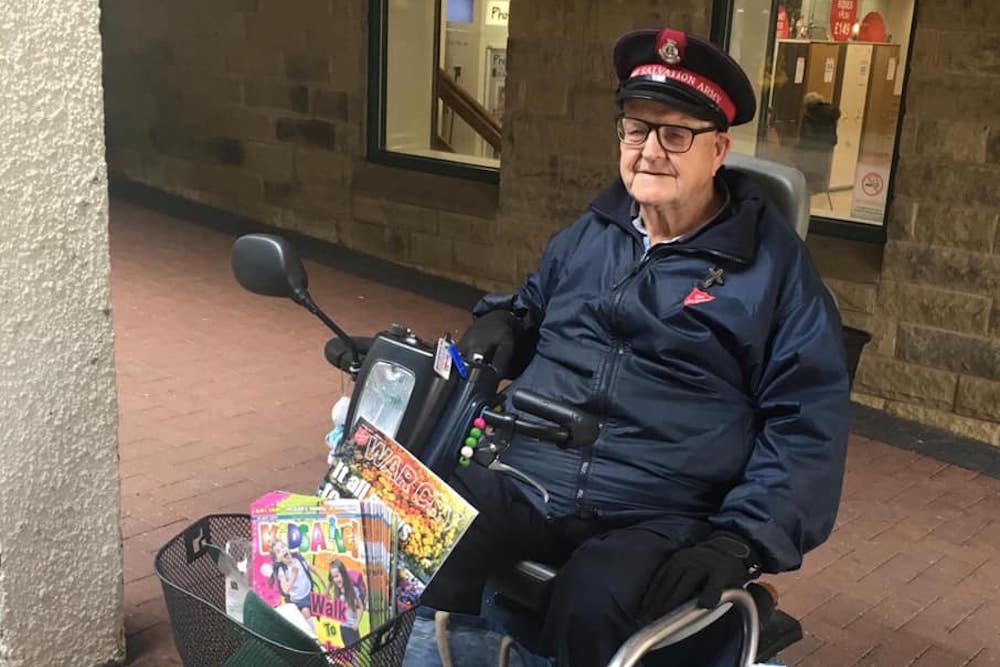 John was born in December 1930, in Bridgwater, Somerset. His family were boat builders and salmon fishermen.
Sadly, his mother died not long after he was born and his father turned to drinking. It wasn’t long before the family had lost everything and lived in extreme poverty. John said at one time the family lived under a dining room table in a farmer’s field.

By the age of 10 John and his older siblings were living in the local Workhouse where John worked tying twigs into bundles of kindling. Food was horrible and sparse in the Workhouse and John was caught stealing food to feed his sister, his punishment was being sent to an Approved School then Borstal where he said he learnt to be a criminal. John then started his life of crime and prison.

John was in solitary confinement for punching a prison guard when a man entered his cell expecting the previous occupant. The man was the local Salvation Army officer and despite John telling him to go away (in words not suitable for this paper) the officer offered to return.

Upon his release from prison he was met at the gates by the salvation army officer and taken to the local men’s hostel and given his first ‘legitimate’ job as a bed maker. Proving his worth, he was later given the job as booking clerk and hit upon his next challenge.

John said he couldn’t read or write, but didn’t want to let on. When men came to the hostel he would pretend he didn’t understand what they were saying and ask them to write their names down, then he would copy the letters down. The Salvation Army officer’s wife realised he was hiding his illiteracy and took the time to teach him to read and write.

At some point, John decided he wanted to give his life to helping the homeless and people like him and applied to become a Salvation Army officer himself. The story of how he got into the Bible college with such basic skills is a whole other story, but in 1963 he went to London to start training as an officer (Salvation Army minister).

It was at college that he met the ‘love of his life’ Irene, and following college they began their lives as hostel managers in Salvation Army hostels.

John and Irene worked in several locations from London to Scotland before coming to the hostel at Lisbon Street, Leeds (near to the International Pool) in 1972. Although John and Irene’s ministry was to the homeless they helped wherever they found a need. John was the kind of man who would see the need because he’d lived it and many of the things he did to help people were done in secret.

It was while watching a TV programme about the 1973 Oakwood Colliery disaster in 2018 when John mentioned to me that he had been there supporting the rescue efforts and offering food and drinks.

During his time managing a hostel in Manchester John was given an Honorary degree by the Manchester Polytechnic (now Manchester Metropolitan University) for his work amongst the homeless.

I remember a time when a hostel resident had locked himself in a toilet cubicle and set himself alight. John thought nothing of climbing over the cubicle wall to save the man.

While John got the recognition for his work it should also be mentioned that Irene was also remarkable in her work with homeless men.

Perhaps I should now say that John and Irene were my parents, and we lived in accommodation in the hostels and were raised to be a part of the shelters.

On one occasion my mum had been told that a man had hurt himself in the dormitory. I joined my mum to see what the situation was. We found a man, covered in blood, and sitting on his bed crying. Irene immediately sat with the man and comforted him until the ambulance arrived. It had been his birthday and he had not been allowed to visit his children, he had got drunk and tried to end his life.

John and Irene eventually returned to Leeds and managed the Lisbon Street hostel until its close, when they retired and moved to Morley.

Even in retirement they served the community and John found his new passion in serving the people of Morley.
Major John Pocock is often described as the face of Morley Salvation Army. He sold Salvation Army newspapers near Morrison’s several days a week and loved what he did.

He described the people of Morley as his congregation, and continued his work of helping those in need. Often mum and I would be given a food parcel and an address and sent to deliver it to a home that only he knew the need of.
As his family, we learnt to accept that his people came first, although I put my foot down when he wanted to miss my graduation because it was held on a Thursday and he’d miss being in Morley.

Majors John and Irene Pocock both became unwell in December 2019 and were admitted to hospital and died a few months apart in 2020.

John never forgot the change made in his own life and together with Irene spent their lives trying to share a life-changing ministry with others. One of the last things dad told me was something he had believed his whole life, that “No man is without hope.”