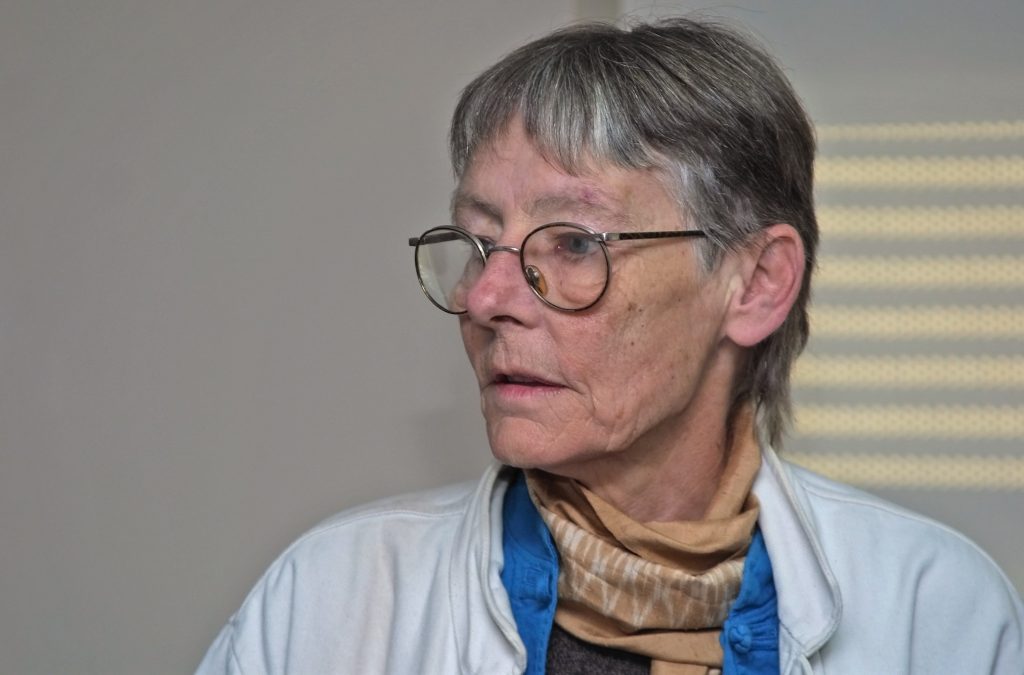 My friend Jane Tate, who died at home in Harlech Terrace in September after a long illness, had lived in Beeston for 31 years.
Jane dedicated her life to giving practical support, advice and help to countless people, especially women and refugees, about housing, benefits, education, immigration rights and much more. As one neighbour said, “She’s a mother to us all – she looks after everyone.”

Born in 1945, Jane grew up in Shropshire, and after university spent time in Hong Kong. The Vietnam war was raging; Jane supported American GIs and campaigned against the war. Moving to Leeds, she lived in Woodhouse, taught briefly, then became a welder at Bray’s, where she campaigned for workers’ rights and was elected GMBATU (now GMB) Shop Steward.

A socialist feminist, organiser and campaigner for human, refugee and homeworkers’ rights, Jane was well known for her support of local people. Exceptionally generous with her time and resources, she helped refugees and asylum seekers deal with complex immigration, benefits and other issues, supported them into education and training, assisted them to complete forms online and gave them shelter in her own home.

She introduced several families to Building Blocks nursery and the Hunslet Club, subsidising fees for those initially unable to pay, and helping them to take up other opportunities. She found time to support the Friends of Cross Flatts Park, selling books to raise funds during our annual summer band concert programme.

Jane also had national and international impact. At the Low Pay Unit in Batley, the National Group on Homeworking and as Director of Homeworkers Worldwide (HWW) based in Dock Street, Hunslet, she organised successfully with others for the rights and recognition of the poorest homeworkers, 99% women, who carry out work for employers such as sewing, packaging, soldering circuit boards, gluing shoe soles to uppers and much more in their own homes.

This work resulted in the UK including homeworkers in minimum wage legislation, and in large companies scrutinising their supply chains far more rigourously. They found that at the end of a sub-contractor’s contract there are often women being paid very, very low wages to work at home without any employment rights or health and safety checks; Jane’s work has prompted them to act and change things for the better.

Working with Vera Media, Jane supported and raised funds for grassroots Indian homeworking organisations by selling their beautifully hand-sewn embroidered wall hangings and cushion covers in exhibitions at Building Blocks and the Dewsbury Road library. Schoolchildren from Greenmount, Cross Flatts Park and other primaries visited, took part in Indian songs and dances, and learnt a lot about life in the villages, and how the sale of the textiles raised money for health care and schools.

Jane’s burial in the Huddersfield Woodland Burial Site was followed by a well-attended gathering in the hall at Building Blocks. Local people and others of all ages, from many different countries, paid tribute to her work, as did former colleagues.

One woman spoke of how Jane had arranged for asylum seekers like her to sit in on Leeds university courses; this gave her the impetus to study once she was legally eligible. She graduated this year.

Many spoke of the care and help she had given them through hard times, arranging lifts to hospital, coaching their children in English and Maths, getting them online, arranging legal support. As one young woman commented, “If I die having achieved just a fraction of what she did, I shall think my life’s been worthwhile”.

Jane read and travelled widely, spoke fluent Chinese among other languages, loved the countryside and liked to watch Scandi Noir series on television, an activity I would often share at her house, good coffee on the table and her cats on our knees. She leaves a strong legacy, and will be long remembered.