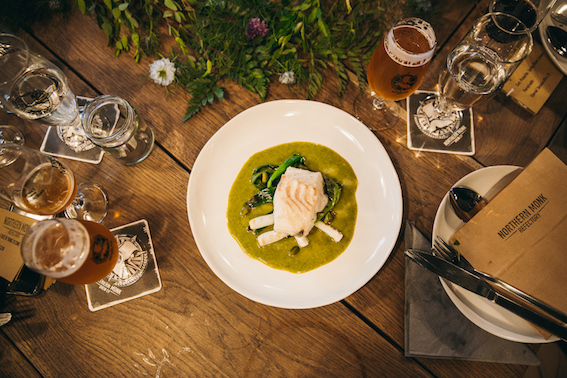 Holbeck welcomed a brand new kitchen at the Northern Monk Refectory on Friday (10 June 2016) following the next phase of a huge year for Northern Monk Brew co, which has included international beer awards, brewery expansions and numerous new beers in development. It really is exciting times ahead.

Northern Monk Refectory opened in late 2014, a sharply dressed taproom with a kitchen run by local food champions Grub and Grog Shop. Grub and Grog have since departed, with Northern Monk looking at refining a complete offer as part of their ambitious 2016 plans. The realisation was that they wanted to look at taking things to the next level with a streamlined, small plates menu and brunch offering and after a long search found new head chef Gavin Jackson. Gavin has over 18 years experience in the kitchen, working for the likes of The Devonshire Arms at Bolton Abbey and training in London. This took him all over, from Canary Wharf to Bethnal Green (via 10 Downing Street) before returning north to work at Cona in Bradford.

Concentrating on British seasonal food, the new kitchen looks to work more closely with the brewery downstairs, creating dishes specifically designed to pair with or in some instances incorporate the beers and ingredients used in the brewing process. Through doing this they’re looking to create an immersive and more cohesive experience for customers at the brewery, taproom and events space. The Refectory Gardens are also set to launch this month, a newly transformed seating area with planters for growing produce to supply the kitchen. This will emphasise their Grow, Brew and Cook community outlook, and is the final piece of the jigsaw.

“We wanted to bring the kitchen in-house so that we could streamline the way in which the brewery works with the kitchen, allowing us to focus on cooking with beers brewed downstairs, and to consider how dishes will pair with beers. “

“This feels like the time to really prove what we can do, our brew team create some fantastic beers, and have won several accolades and The Refectory is the face of that. It’s great to have a team in The Refectory that are keen to look to the future, and see what we can offer to the scene in Leeds.

“We’re hosting more events, from pub quizes, salsa classes and lunchtime yoga, to private tastings, beer launches and yard sales (the first one being on Sunday 26 June). We’re also keen to reach out to the communities around us, working closely with organisations such as The Real Junk Food Project and Simon On The Streets. Northern Monk is all about creativity and collaborative spirit, we are always keen to work with like-minded groups and individuals, and that takes us on some brilliant journeys, ‘never a dull day’ springs to mind!”

“It feels like every chef says this… but it is all simplicity. When you keep things simple, the food speaks for itself. It feels good to have found a venue that reflects how I feel about food… Northern Monk’s ethos of taking tradition and evolving it into something new perfectly matches the food I want to create. It’s hard to find somewhere that you can try to offer something a little different, but here I think I have a chance to do that.

“The menu will change frequently; I never want our menu to stagnate. We’ll be moving with the seasons to make sure we always make the most of some more underused British produce. I’m also excited to see how we can showcase food and beer pairing, making sure that our dishes really compliment the brewing that happens on-site.”

One Reply to “New food offering at Holbeck’s Northern Monk”