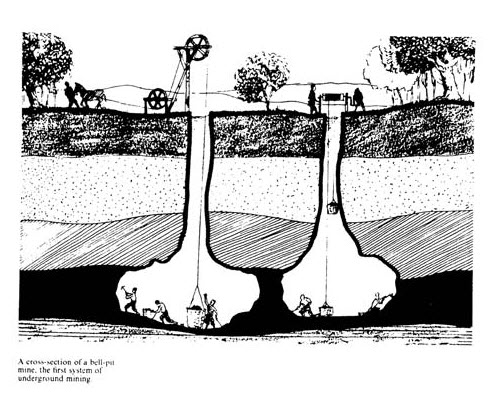 Coal mining began in Beeston prior to 1549, we know this because in that year Ralph Beeston died and in his will left his ‘Coyle Mine’ to his son Robert.

In fact, mining was probably the largest single factor in the fortunes of the Beeston Family, and enabled them to rise from small landowners to be Lords of the Manor.

The pits they drew there revenue from were the Beeston Park Pits, these were situated in the fields behind the Southleigh Estate. The Beeston ‘Bed’ was a multi-purpose coal with an abundance of brick-making material and fire-clay beneath the seam, above which was a layer of ironstone, the seam laying very close to the surface. This geological structure gave rise to an acid brown soil, and this encouraged the development of the one time largest rhubarb growing area in England. The seam runs south-west and was worked at Middleton for 300 years, later at Rothwell, and if our mines were still open today it would still be worked at Castleford. In its infancy coal mining took the form of a bell, known of course as ‘Bell-Pits’. The other method was to dig into the bank at an angle this was known as a drift mine or ‘Day Ole’. The art of both these excavations was knowing the moment to get out before it all collapsed as with a bell pit, Beeston was riddled with Bell Pits and Day Oles.

The 1840 Survey Map records a fair proportion of these early pits, but does not state which kind they were. In the village itself there were five: the Durban Estate possessed one in Wood’s Field; there were two on the allotments at the side of King Field; another was near to St. Anthony’s Road and the Bowling Club; and one was close to the present day Hugh Gaitskell School, houses for this pit were built in Ladbro Fold and were of the one-bedroom terrace type, an archaeological dig was carried out in the early 21st century on Nos.5 and 7 in this Fold. There was also one at the top of Parsons Field.

On the ‘Pack Horse’ track that still runs along the rear of St. Mary’s Graveyard there were two more pits; Beggars Hill possessed one as did Wooley’s Brickyard on the left-hand side of Barkly Road, and comparatively it was not a long time ago that a ‘Bell Pit’ was found on Leeds United’s Ground next to the goalposts at the ‘Kop’ end and at the Old Peacock across the road from there is the site of another pit.

A ‘Plate Road’, which was a continuous stretch of iron gutter, made in the same principal as a railway line, and laid on the ground ran from what is now Subway’s (Grandstand Garage) on Elland Road up the side of Parson’s Field and so enabled the coal waggon to reach Beeston Station. The station was built by the Great Northern Railway for the coal and ore traffic in the 1800s and was removed under Dr. Beeching’s plan in the 1960s. The Nosters and Marley terraced houses were another feature added to Beeston to assist the growing mining community.

Ingles Tannery had the entrance to a mine under their offices, the pumping station was in a field opposite. It is said that the mine had a ‘Pan Shaft’ with fires to keep out the damp and also to get out the gases. Cad Beeston or Beeston Hill possessed twelve pits, the Red Hall and Cardinal Estates had four apiece in their vicinity. There were two in the fields bordering onto Beeston Ring Road – these fields became an opencast site in the 1950s.

The land near Royds had one and there were three on Stanks Hall land. The White Holling Pit was on the site of the present Parkwood Estate, and the area with the largest concentration of pits was the triangle of land using Gypsy Lane, Southleigh Road, and the boundary of Middleton Woods, this area was called ‘Pit Hills’ and held twenty-one pits.

Child labour was commonplace in the pits, and by 1874 Beeston was no exception. The main colliery at Beeston had an explosion of ‘Fire-Damp’ causing the loss of nine lives, four of these being children under the age of fifteen. Children were also employed to ‘Knap’ ironstone at a nominal amount a day.

In the 1861 Whites we find A. Harding & Company, Beeston Manor Coal & Iron works. The 1870 Whites Directory Hird, Dawson, and Hardy are shown as Colliery Proprietors but no pits are named but surely these names along with Hezekiah Tempest are familiar, of course, they are all names of streets off Tempest Road! At the corner of Cross Flatts Park the first house you come to walking down the hill is called Cranbrook House, Lord Cranbrook was the Chairman of the Low Moor Company

The mining rights of the village were bought by the Low Moor Company of Bradford in the 1880s, this meant they were effectively Lords of the Manor. By this time the advancement of mining techniques produced proper shafts and winding gear on the Beeston landscape. According to the McCorquadale Directory of Leeds for 1876 Low Moor House, Barkly Road, was occupied at that time by Hezekiah Tempest who was shown as Colliery Manager at Millshaw Colliery, in 1888 their General Manager was Levi Woodward who in 1876 was a Colliery Steward living in the Low Moor Cottages as was another Steward called Charles Thornton.

Opposite Low Moor House was Beeston Colliery, Bye Pit, looking at the map this seems to have been where the later Myers Leather Works was situated and is now the Atha Estate. One of the pits under their control was Hall Pit, the entrance of which was in the proximity of the Heath Estate. The shaft ran along the base of the hill into the present playing fields. It was not very deep, in fact it is told that you could actually kneel down and talk to the miners if you shouted. Hall Pit was closed prematurely when the miners hit a spring, the roof caved, in and the mine flooded but no lives were lost.

Also in the 1876 Directory William Ingham & Son are listed as Colliery Proprietors owning the Dragon and Manor Pits in Beeston.

It is said that between 1840 and 1870 the hills around Beeston glowed with the fires of many blast furnaces using the coal and ironstone produced from these pits and the village earned itself the nickname of ‘Cinder Hills’. The Daltons and Cross Flatts housing estates were built on what were originally pit hills though older people may remember them as the ‘Poppy Fields’.

Another Plate Road ran down Barkly Road past the Dean Pit located near where St. Anthony’s Church and School are now to the Lord of the Manors’ coal staiths situated at the bottom of King Field. The Drysalters Pit, located on the opposite side of the road to Crow Nest Lane, is now under the motorway link road, there were five shafts on this site and the nearby Beeston Near Royds houses came into existence as homes for the miners. The slag from the Drysalters Pit was used in the creation of the Ring Road in the 1930s.

The Low Moor pit was a continuation of the seam which started in the Beeston Park Pit, this pit was situated behind what is now the Broadway Public House on Dewsbury Road. Before Dewsbury Road was widened in the 1920s there was a plan in place to make where we now have the Allenby Estate a marshalling yard for the pit on a spur from the Great Northern line from Tingley to Hunslet East but nothing came of this. There were two seams according to Mr. A. Robinson, the top one named ‘Crow Ole’ and the lower one named the ‘Black Bed’. The top side was mined under the South Leeds Golf Club House and the lower side was mined under the former Hunslet Rugby League Ground at Parkside. There was an accident here in 1902, James Metcalf, George Elliot, and Benjamin Richardson fell down the pit shaft and lost their lives, as did Tom Basker in 1909. The pit eventually went bankrupt and closed on Good Friday 1928 thus bringing an end to coal mining in Beeston.

Various Directories have said that the sinking of these pits spoiled the appearance of the village, but this geological phenomenon helped the village into and through the Industrial Revolution.