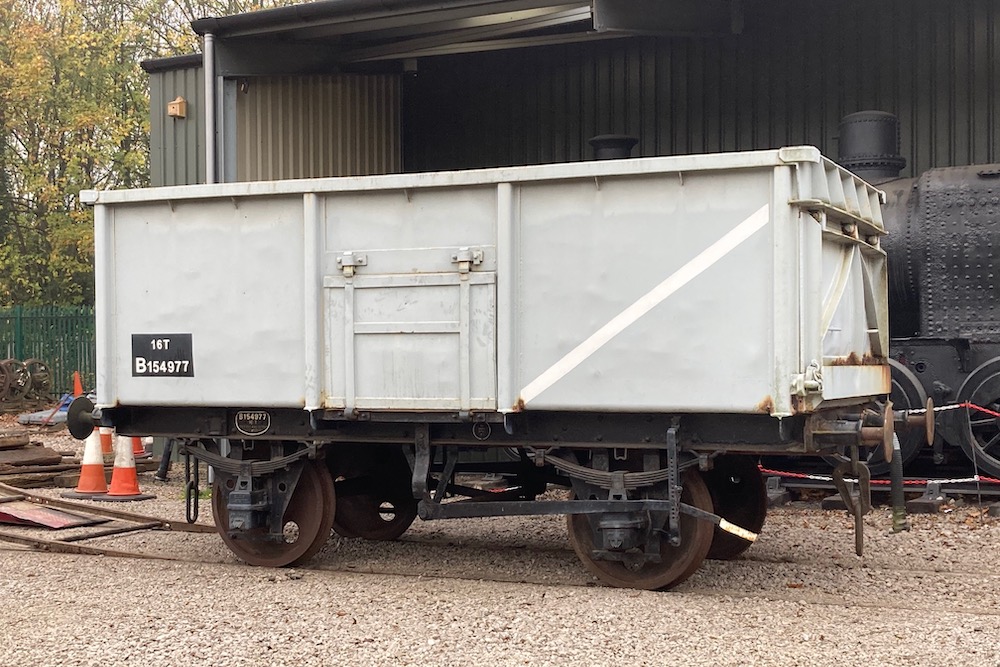 The 16 ton Mineral Wagon was once one of the most numerous wagons operated by British Railways. Over a quarter of a million were built to carry coal, minerals and scrap metal.

They were a common site on the Middleton Railway carrying coal from Broom Pit and scrap metal from Robinson & Birdsell Ltd’s Yard to the British Railways interchange at Balm Road. Many of the Trust’s older volunteers will have worked trains of these wagons to and from Robbies Yard in the 1960s and early 1970s.

The Trust has acquired an example of one of these wagons for its collection because they help tell a very important part of the story of the Middleton Railway.

This particular example was built in 1954 and is one of the 15,190 wagons to Diagram 108 made by Teeside Bridge Engineering Ltd. At some stage whilst still in British Railways ownership it was re-bodied and lost the upper flap doors – some times referred to as ‘London Traders Doors’ – which were a characteristic feature of the design. It was sold to Rosyth Dockyard in Scotland before finally being preserved by the Manchester Museum of Science and Industry.

Now surplus to requirements, this wagon, along with others, was offered to Accredited Museums via the railway press and Middleton Railway Trust wrote to them asking to be considered. A visit to site showed that B154977 was in the best overall condition and the staff at MOSI kindly allocated it to the Trust.

“We are very grateful to the staff at Manchester Museum for donating the wagon to us. We can now tell the story of the early preservation years when, as the only all-volunteer freight operating railway, we ran trains of these vehicles almost daily for many years.”

Hopefully this wagon will soon be seen in use on demonstration freight trains.

Middleton Railway is not running trains through November, but is preparing for its ever popular Santa Specials to run through December. Find out more and book tickets here.

One Reply to “Mineral Wagon is Middleton Railway’s latest acquisition”