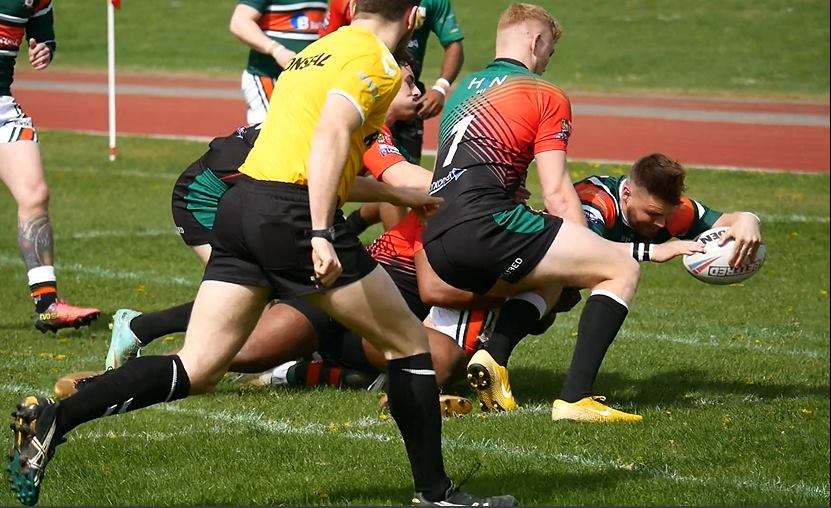 Hunslet’s chances of extending their lead at the top of League 1 were stunted today by a slick and skillful performance by a much improved London Skolars side.

Although the Skolars lay in third position, Hunslet were the favourites and started like a whirlwind putting the visitors under pressure from minute one. Reece Dean put the impressive Josh Tonks over on 5 minutes and converted the try to give the hosts a 6-0 lead.

It took ‘til the tenth minute for London to get into Hunslet’s half, but when they did it was with skill and stylish handling sending Wilkinson over to level the scores up.

On 15 minutes Skolars took the lead when an unfielded kick was pounced upon and at 6-12 London showed they weren’t the easy-beats of previous seasons.

Hunslet then put the London line under pressure, but good tackling held the Parksiders at bay, until a superb move involving Mike Emmett, Nathan Chappell and Gareth Potts sent Ben Heaton over for a try, which with the conversion levelled things up at 12-12.

Fortune favours the brave and on 25 minutes a London chip kick bounced fortuitously for Barran to score under the posts edging the visitors into a 12-18 lead.

Hunslet ended the half the better though, Watson profited from a Josh Tonks pass to make it 16-18 after ten minutes of constant pressure, and from the restart London kicked out on the full giving Hunslet a chance of the lead, but Chappell looking sharp was tackled into touch just short.

The second half could not be any more different though. London came out chomping at the bit and Hunslet were sluggish and mistake ridden.

A try on 41 minutes for London came from a miss-fielded kick, converted. Before a penalty for an elbow in the tackle stretched London’s lead to 16-26.

Further Skolars tries on 45, 50 and 65 minutes put the game beyond Hunslet’s reach. Each one coming from Hunslet mistakes, interceptions or losing the ball.

At 16-42 it looked an embarrassing afternoon for the South Leeds outfit, but they rallied late on. Frantic passing lead to a Marcus Webb try (unconverted), before Adam Robinson barged his way over (Nathan Chappell converting) to reduce the score to 26-42.

Still with time left, Hunslet had chances but seemed to panic in the final pass, and so London held on for a well deserved victory.

The League 1 table looks tighter now with Whitehaven leading the pack, Hunslet a point behind, followed by London Skolars a point behind them.

A cup and league game against Workington follows now, with Hunslet needing to get back on the horse and regain some momentum. Today’s result may be an anomaly, but if it is Hunslet need to get it out of their heads for the upcoming challenges.