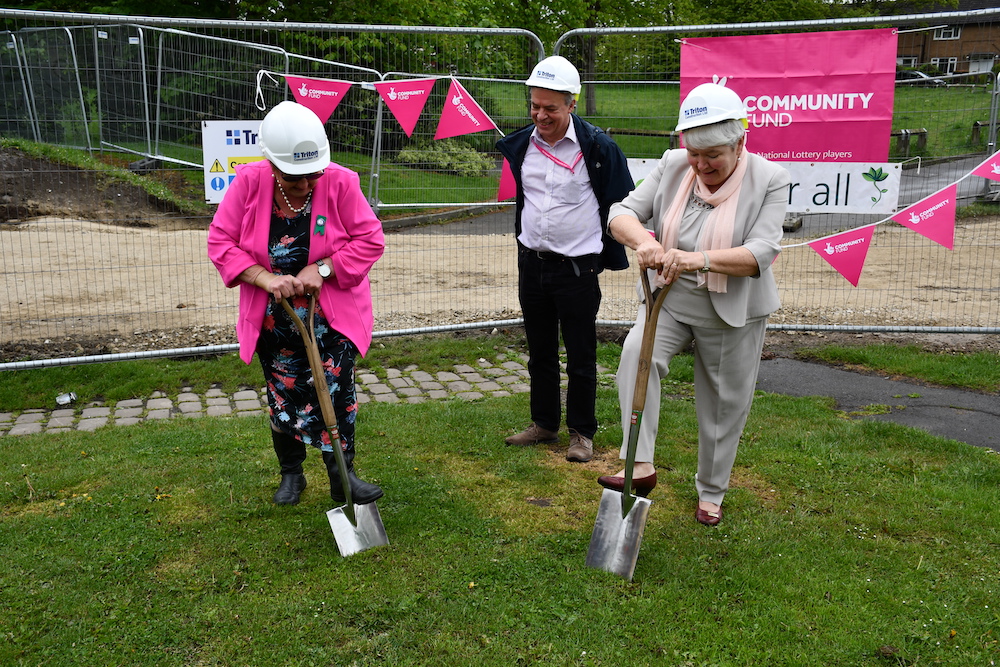 The first sod of grass was turned for the building of the new Beeston Village Community Centre on Friday 3 May 2019.

Cllr Angela Gabriel (Beeston & Holbeck) did the honours, helped by Pat McGeever, CEO of Health For All and Steven Gould from the National Lottery Community Fund. Representatives from community groups who have used the Centre and will be using the new two storey Community Centre in future together with Architect Andrew Croxall and  main contractor Triton were also present.

The National Lottery Community Fund has contributed over £1.1m to cost of building the new two storey centre, which replaces the former library building next to Hugh Gaitskell Primary School. The project has been led by Health for All’s Toshal Bhatia from its conception with support from the Centre’s steering group members and dedicated volunteers.

When Beeston Library moved to its current home on Town Street in 2009, Health For All worked with two partner organisations Better Action For Families (BAFF) And Beeston Community Forum which played a pivotal role in identifying the need for and calling for a community centre to serve this part of Beeston. This work was supported by local ward Councillors including Cllr Angela Gabriel, who help with the transfer of the building to Health For All.

“It is exciting to see the construction of the Centre being initiated. Beeston needed this kind of shared community space that is accessible and welcoming to local people.”

As part of the ceremony Chinese Elders group, Lychee Red, performed a Lion dance to wish good fortune on the project. The group initially formed at the centre and are keen to move back into the new building.

“The Centre is an example of real Community Development work bringing communities together with shared needs and enabling them to run activities in the community for local people.”

“We are delighted that the building work has started. All the community groups who use the centre have waited a long time and the building of the new centre brings the message of togetherness and hope.”

The building work is expected to last about seven months. A grand opening ceremony will be held sometime in November.