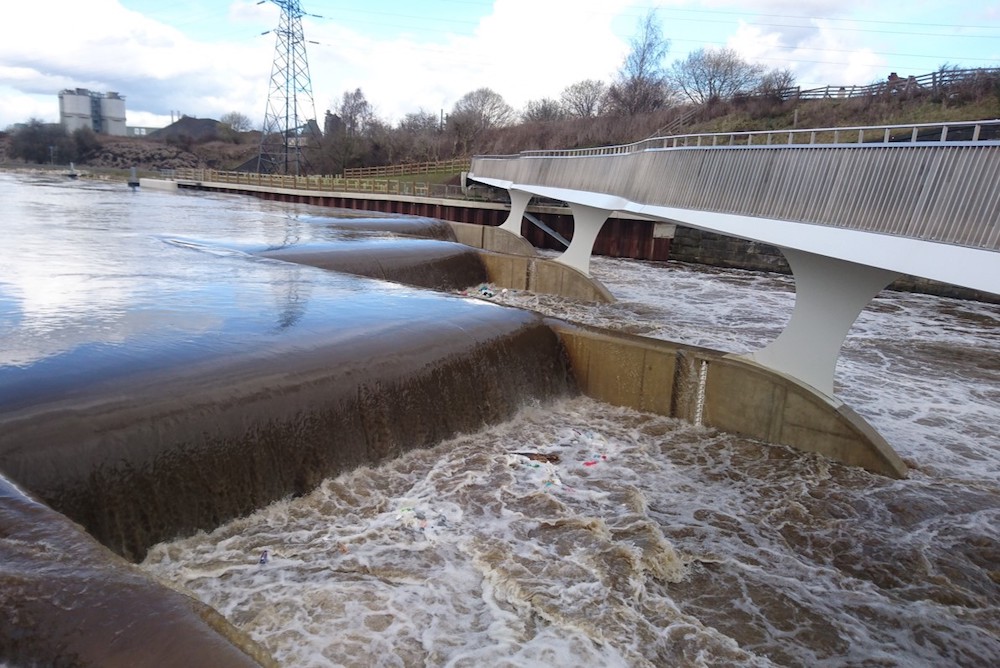 Leeds City Council and the Environment agency have reflected on the impact of the Leeds Flood Alleviation Scheme Phase 1 (Leeds FAS1) since its launch five years ago.

On October 4 2017 the first formal flood defences in Leeds were officially opened. An investment of £50m, the scheme is made up of a series of linear defence walls and manual flood gates between Holbeck and Knostrop, as well as the removal of the barrier between the canal and the river at Knostrop.

The two state-of-the-art moveable weirs, at Crown Point and Knostrop, are the main innovation of the scheme. The moveable weirs can be lowered to control river levels and create more room in the channel when required during periods of heavy rain that would previously have resulted in flooding. These interventions combine to help protect 3,000 residential properties, 500 businesses and 22,000 jobs from flooding, offering up to a 1-in-100-year standard of protection (or 1% annual exceedance probability), including a climate change allowance up to 2069.

In the five years since its completion, the scheme has been readied for deployment over 100 times and operated eight times, protecting the city centre from damaging flooding. Storm Ciara in 2020 resulted in the second highest levels ever recorded on the river Aire (2.06m). In 2022, storms Dudley, Eunice and Franklin brought similarly high river levels (1.97m), but in both instances the FAS served its purpose successfully.

The scheme’s success can be attributed both to its cutting-edge design and delivery, but also to the hard work of Leeds City Council’s Flood Risk Management team working closely with the Leeds City Council Resilience & Emergencies team, the Environment Agency and the Canal Rivers Trust. The scheme is monitored by Leeds City Council staff 24/7 365 days a year, with continued maintenance and drills to ensure it is ready to operate when needed. There is also a team of around 25 trained specialists on call to operate the FAS during a flooding event.

The works to protect Leeds from flooding continue with phase 2 of the Leeds Flood Alleviation scheme (Leeds FAS2). Projected to complete in 2023, the engineering elements of the scheme stretch from Leeds Railway Station, up to Apperley Bridge, with a catchment-wide natural flood management scheme running from Leeds through to Malham and the source of the River Aire. Once complete, the scheme will protect a further 1,048 homes and 474 businesses as well as increasing the level of protection for the whole of the FAS2 and FAS1 area to 1-in-200-year standard of protection (0.5% annual exceedance probability).

The natural flood management works, which have already planted over 400,000 trees to date, will ensure that the scheme is protected against the effects of climate change up to 2069 as well as offering a range of environmental benefits like carbon capture, biodiversity and more throughout a large portion of West Yorkshire. Alongside Leeds FAS2, there are a range of smaller projects designed to protect specific areas at risk across the Leeds City Region including Churwell, Wortley, Meanwood, Thorner, Potternewton, Wetherby and more.

Despite the effectiveness of the works to alleviate flooding in Leeds, there are steps that everyone can take to plan ahead and better protect themselves from the impact of flooding. This winter, Leeds City Council will be promoting guidance across its social media channels to encourage all Leeds residents and business owners to:

“We are incredibly proud of the success of the Leeds Flood Alleviation scheme over the past five years. Many people in Leeds will remember the devastation of the flooding on Boxing Day 2015, and we are committed to doing everything in our power to protect the people of Leeds from experiencing the pain of flooding in the future. Prior to Leeds FAS opening, just five years ago, Leeds had no flood defences to speak of. We have moved from that position to a well-protected city in less than a decade with an investment from FAS1 and FAS2 of over £160million. Leeds FAS1 has already protected us several times, and once FAS2 is completed next year that level of protection will be further reinforced and widened to more of our residents and businesses along the Aire corridor for decades to come.

“Our works to increase the flood resilience of Leeds help the city to adapt to the effects of climate change, they are a key part of our response to the climate emergency. The Leeds FAS1 has been used more times than was originally projected at the planning stage, and this is likely to increase as the effects of climate change continue to grow. That is why we are committed not only to the hard defences to protect Leeds now, but also to natural flood management techniques at a large scale. This includes the planting of up to two million trees and innovative land management techniques that will slow the flow of water coming from the whole catchment, create habitat for wildlife, areas of woodland for residents to enjoy and increase the efficiency of our farmland.

“I’d like to thank the efforts of the team at Leeds City Council who continue to be responsible for the FAS. We can protect ourselves further by creating even the most basic of flood plans, I encourage Leeds residents to take some time to view the resources on our website to help increase their own resilience to flooding.”

“The first phase of the Leeds Flood Alleviation Scheme not only benefits hundreds of homes and businesses in the city but also safeguards 22,000 jobs due to the increased level of protection it provides. We’re always looking for innovative ways to use technology to reduce flood risk, so it’s been great to see the moveable weirs successfully operating over the last five years.

“Leeds City Council and the Environment Agency continue to work together in partnership to better protect the city. This is part of significant ongoing investment in flood schemes across Yorkshire and the Humber, with over half a billion pounds invested across the region since 2015 – more than any other part of the country.”

Photo: The moveable weir at Knostrop