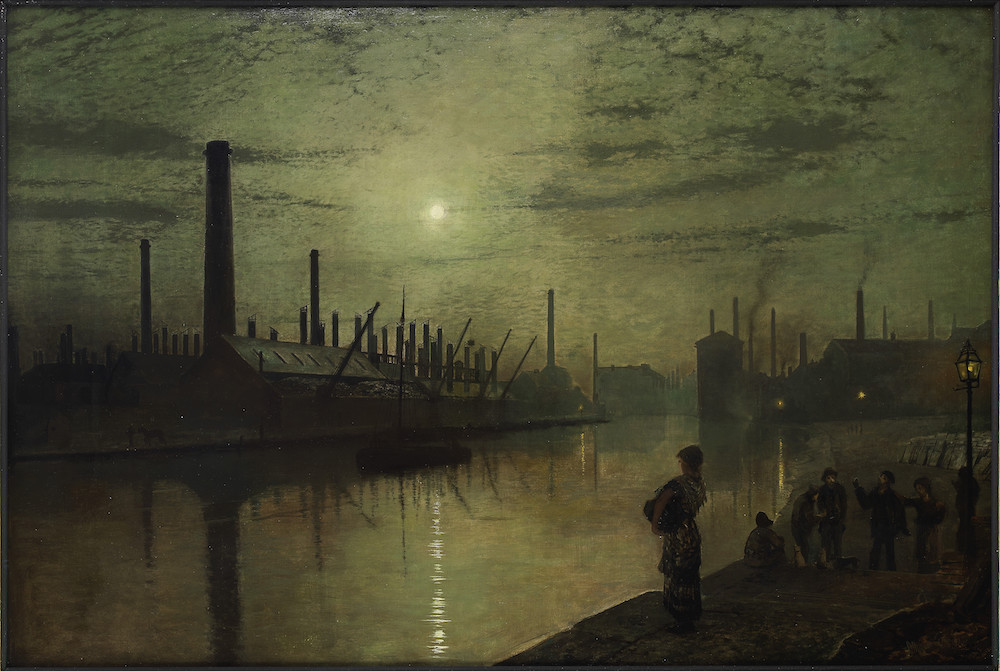 One of the most beautiful paintings in Leeds Art Gallery is “Iris” painted in 1886 by John Atkinson Grimshaw, in my opinion. The painting exemplifies all of Grimshaw’s painting skills of portraying light and colour – it is otherworldly.

Today, the artist is considered to be one of the Victorian era’s greater painters. Born in 1836 in a back-to-back in Leeds, he was a self-taught artist, who, to the dismay of his parents, left his job as a Great National Railways clerk to follow his passion.

Grimshaw died on 13th October 1893 of tuberculosis and is buried in Woodhouse Cemetery (which is now St George’s Fields). One of the houses he lived in is in Cliff Road in Headingley and has a Leeds Civic Trust blue plaque.

Four of his children went on to become painters. One of his sons Arthur Edmund Grimshaw (1864-1913) was the master of the choir at Leeds Cathedral and was a conductor of the Leeds Symphony Orchestra.

When Leeds Art Fund and Leeds Art Gallery were alerted to the sale of a Grimshaw painting that had been housed in a private collection for years, they were able to secure it for future generations, thanks to the generous support of the Hurst bequest.

‘Reflections on the Aire – on strike’ was painted by Grimshaw in 1879. Whilst the painting is one of his signature moonlit scenes it is also combined with a social message, making it a rare example of his work.

The painting depicts a lone female figure looking out over the dark waters of the River Aire, a somber industrial cityscape in the background. The scene is thought to be a painting of Knostrop Cut, across from Hunslet Mills. It is thrilling to imagine this great Leeds artist surveying the same area we can still see to this day (minus the industrial cityscape) and memorializing it in his inimitable style.

The location for the artist’s viewpoint was established by gallery curator Nigel Walsh and curator of Industrial History, John McGoldrick. In conjunction, they discovered that this was a dire time for industrial workers and that strike action was prevalent in early 1879. At this time, Grimshaw lived just along the river at Knostrop.

“John Atkinson Grimshaw’s stunning paintings captured the dramatically changing face of Leeds as an emerging industrial city, and, as we can see in this painting, his empathy for the plight of his fellow citizens.

“We’re extremely fortunate to have such an extensive range of his work here in his home city and for this beautiful new addition to be joining the world class Leeds Art Gallery collection.”