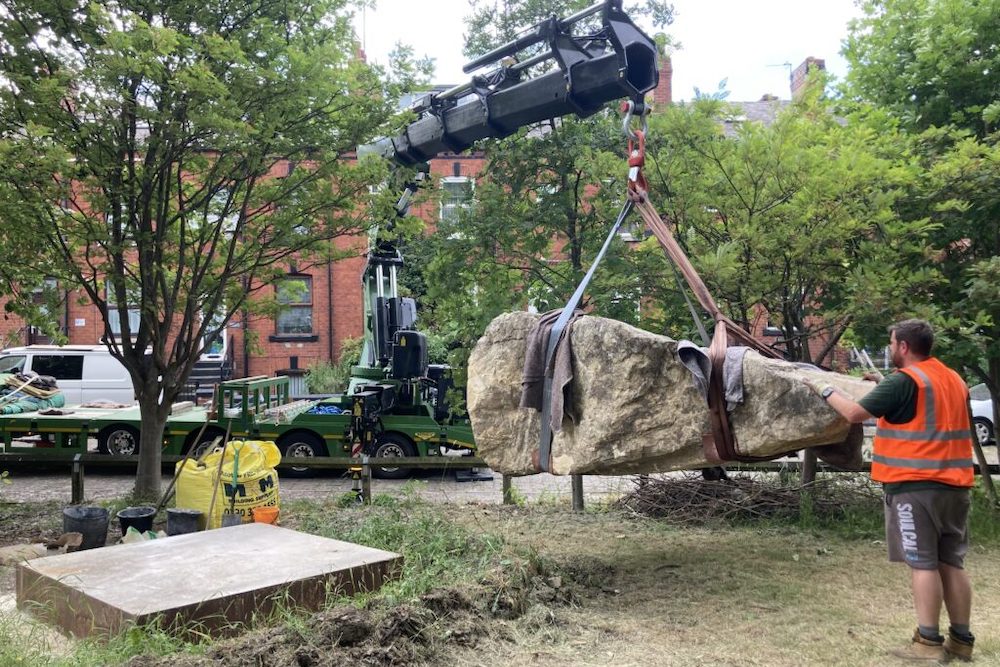 As the sun passes over the yardarm of the year and the longest day is behind us, we at BasementArtsProject prepare to set sail onto the high seas of summer. 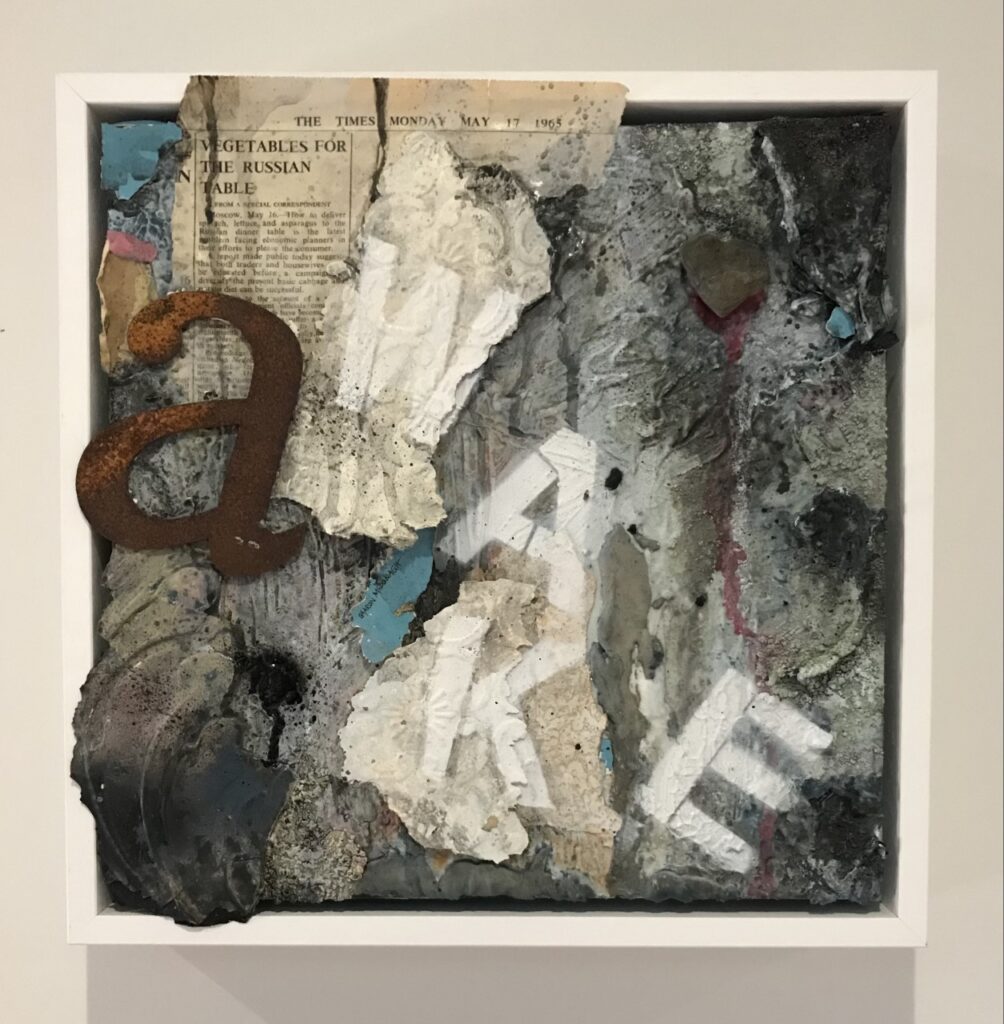 In a few weeks time we will be opening a new exhibition by Sharon McDonagh who creates work based on decaying interior architecture. The end result is an incredibly nostalgic look back at the things we would learn if only walls could speak.

On what was surely the hottest and sunniest day of the year so far, Thursday 23 June, BasementArtsProject, together with artist Keith Ackerman and sculptor / technician John Barber, convened on a patch of grassland adjacent to Basement for the final stage in phase II of a project that we began in 2019, pre-c***d-19 lockdowns. 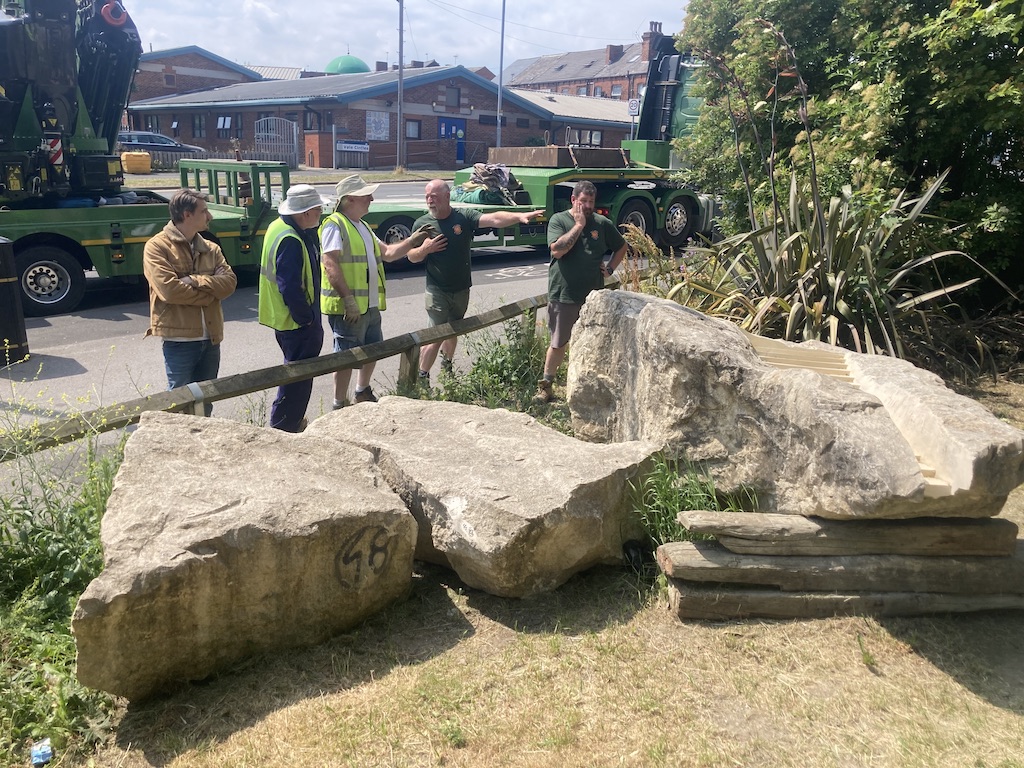 As the rush hour traffic dissipated, we were met by an enormous crane at the bus-stop on Tunstall Road. On the back of the truck was a concrete plinth generously donated by the Yorkshire Sculpture Park in Wakefield. The project on this day was to install an 8ft, 7tonne sculpture on the land, which Keith Ackerman has been working on since March 2019.

From the moment work began, we had an ever changing crowd of curious onlookers stood at the edge of the land, watching as we started the heavy lifting process. As I am standing at the edge of the road chatting about the project with passers-by, a slow shambling figure approaches, emerging silently from my peripheral vision. I recognise this person from the back of the buses into town, and also a regular on this corner of Tunstall and Dewsbury Road. It would be with an element of certainty that one could assume from appearance that this person has a serious drug habit. On the buses he creates an air of discomfort and unpredictability amongst other passengers, with his constant loud conversations with himself, continual filling up on masses of chocolate and sweets whilst remaining extremely thin, and his unkempt appearance.

It is wise to be cautious but it must always be without judgement or bias.

He stops next me.

Him: ‘It’s lovely green this is’

Me: ‘That’s good to hear’ (whilst suspecting that the discarded needles, blood encrusted cardboard and sheet that has been used for bedding, accompanied by a pile of human faeces currently drying in the sun, is quite likely his)

Him: ‘The grass is really nice to lie on’

Him: ‘What are you doing on here?’

Me: ‘We’re putting up a sculpture in your bedroom’

Him: ‘That’s gonna look really good there isn’t it’

Him: ‘they say it’s to do with the drugs I use … but it’s not, they just appeared overnight’

And in the same manner as he arrived, he shuffles off silently in the other direction. 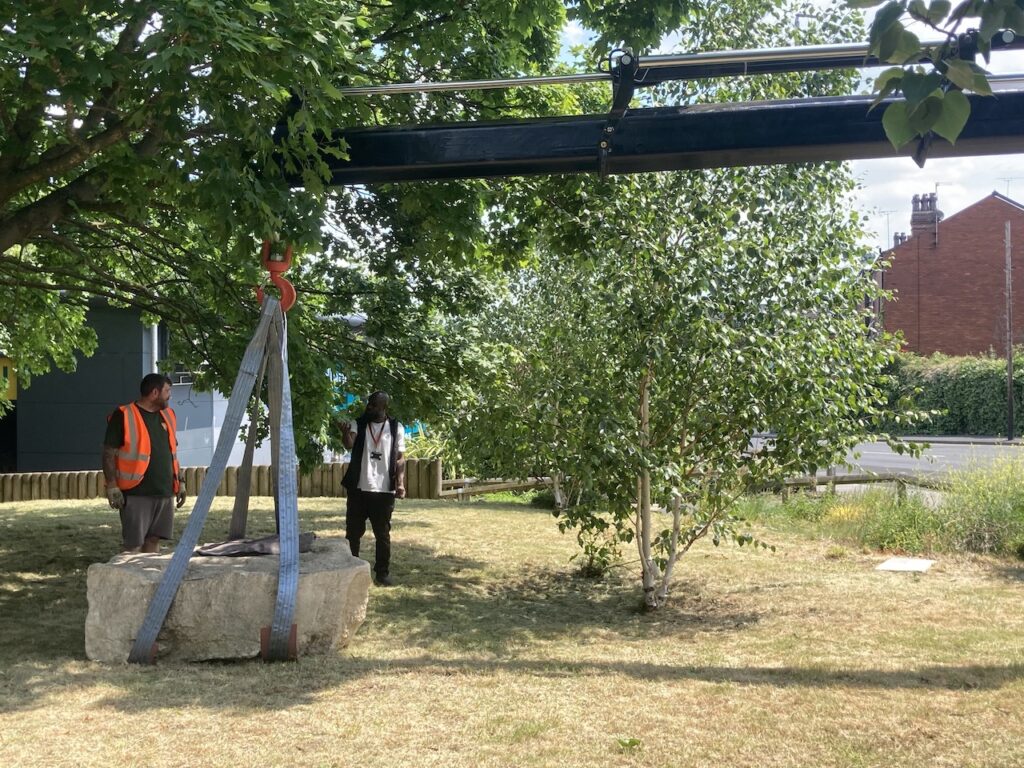 The day progresses, people come, people go. Bench stone number one is moved into place. Bench stone number two next, and then ‘Jacob’s Ladder’ is brought up from its year long resting place, on its back by the fence at the edge of the road, up, onto the back of the truck. All seven tonnes. The wagon moves from Tunstall Road into the narrow cul-de-sac that is Burton Terrace, and resets itself ready to lift the work upright and into place. 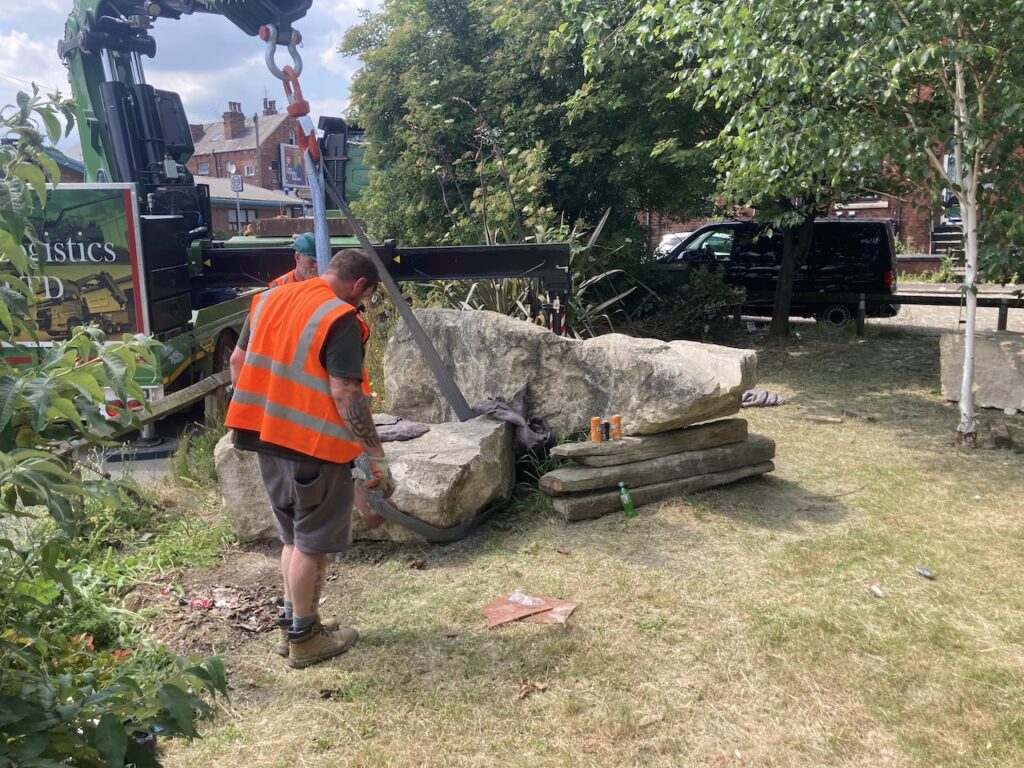 The sun is at its highest point and is beating down us as the crane operators lift the foundation block into place. Two tonnes of concrete swinging between the Rowan trees and being lowered carefully into the correct position. Earlier on in the week, Keith, John and myself had spent the day backstage at Yorkshire Sculpture Park in Wakefield, drilling holes in the base that is now being lowered to the ground.

The drilled holes, correspond exactly to the three pins that we embedded in the base of the sculpture late last week. When upright ‘Jacob’s Ladder’ will be lowered onto the plinth so that the pins engage with the holes in the base. A nearby neighbour has come over and is currently sat on one of the newly installed stone benches. An Asian man has been stood at the bus stop watching since early morning. 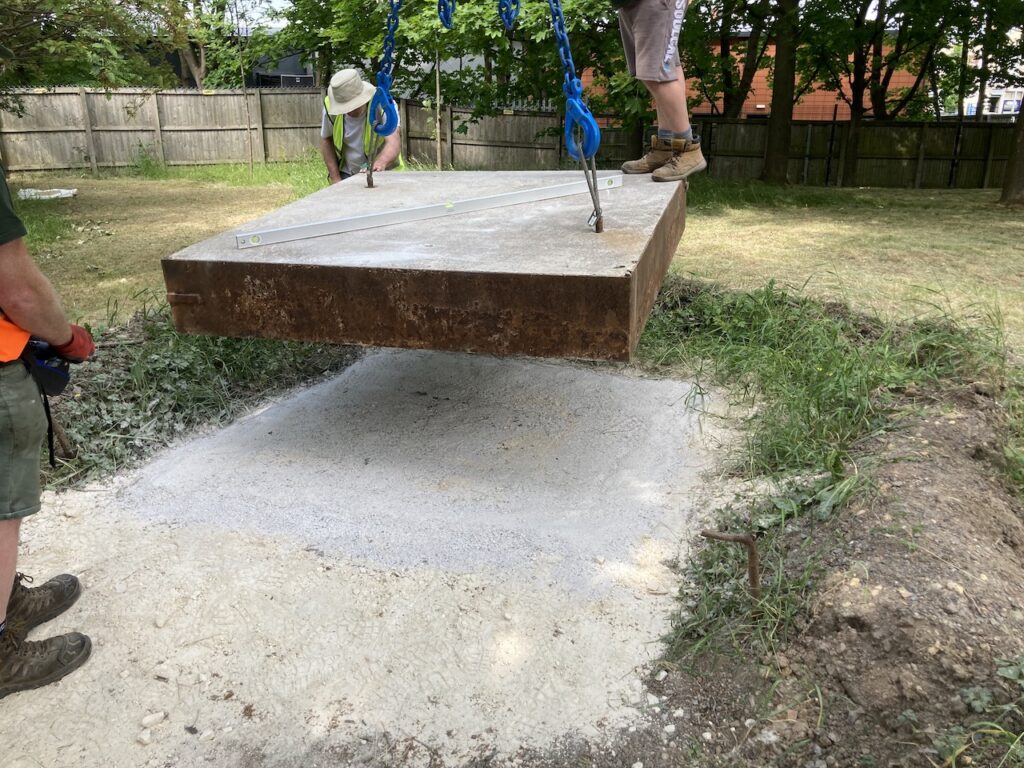 A couple of men come stumbling across the land, apparently oblivious to the goings on. They take up residence under what I now understand to be the drugs tree. They are there for quite some time, huddled behind the tree where the lands dips down. Eventually they leave. I’m sure I will find more needles there later.

Finally, with the plinth bedded in, we have ‘Jacob’s Ladder’ in the air, slowly making its way between the Rowan’s and onto the grass. The job now is to get it upright without upsetting the pins in the base. This is the longest and most intense part of the operation; the slings around the body of the work have to be reconfigured so as to be able to suspend it upright, and move it at the same time. Everything has to be done extremely slowly and in such a controlled manner, so that the moment it is vertical it does not tip beyond the point of balance. There is one tense moment where a sling catches and snaps leaving the sculpture hanging at a jaunty angle. After it is lowered for the second time into place and concrete has been applied at the base around the rods it is correct. The worries that the risers of the steps might not be vertical, or the treads less than horizontal to the base do not come true. Keith’s measurements are spot on, and the slight rock that was present on the first drop is now gone after the concrete has been applied. 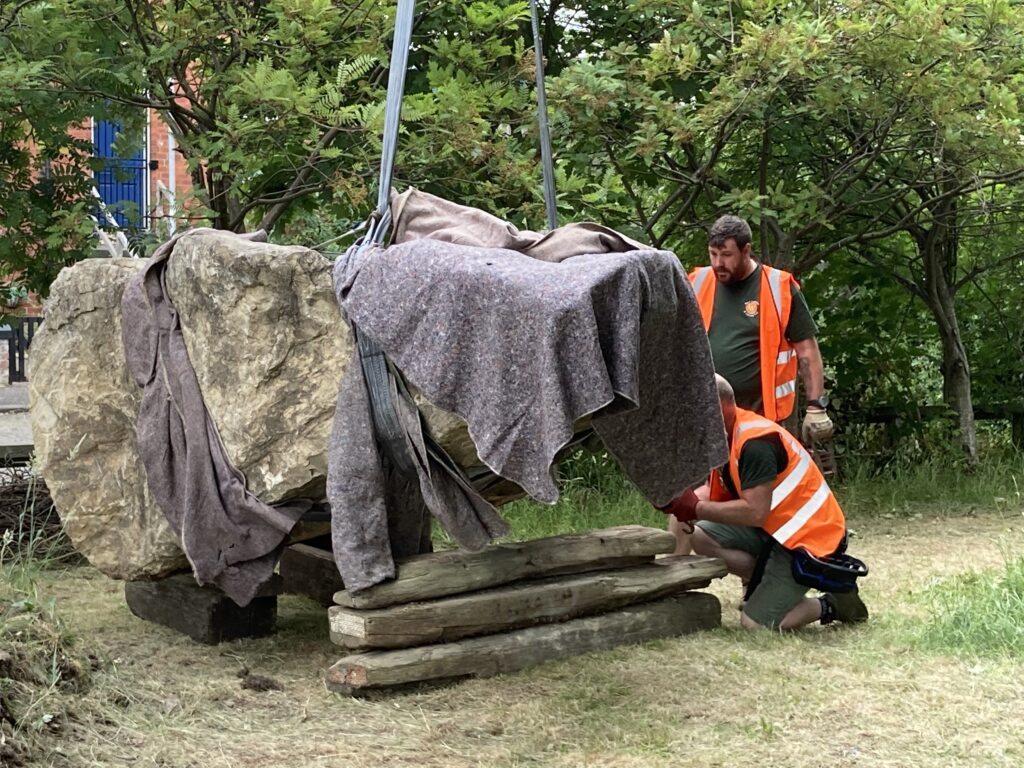 There is a point at which there is an imposing clunk as the work slots into place for the final time, a round of cheers and applause go up from the assembled onlookers.

It is late in the evening by the time all of this has been finished and the light and heat of the day is gradually dissipating. Keith, John and myself sit under the foliage canopy of a Sycamore tree on one of the bench stones. The work is imposing and monumental atop its slight hillock, any fears that it would not feel big enough are unfounded. 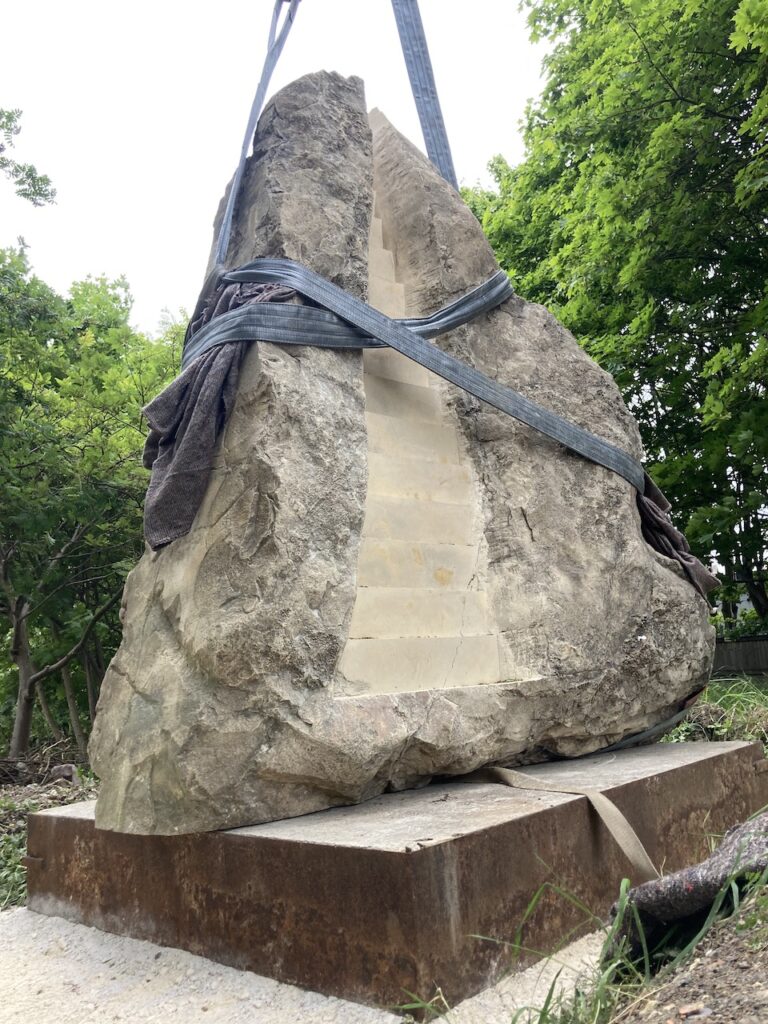 The next job, is to start filling in around the plinth so that we can turf right up to the edge of the square upon which it is set. There will also be some sessions with the community in the near future in which they can experience some of the processes and techniques of direct carving. A man rushes past us, speaking in what I take to be Polish, down to the corner of the land and urinates. He rushes back past us offering his apologies. It is going to take some time to make this land what it was before the shops moved in around it: a place for picnics, sunbathing, resting, taking time out from whatever else is going on around about. I hope we succeed. This is a project that is as much about the reorientation of social attitudes as it is about art. It just so happens that, what I reckon might be Leeds’ biggest stone sculpture stands at the heart of it.

After everyone has gone home and it has gone dark, I go to pick up some food from Aldi which stands next door to the land. There is a group of people including some police standing in the trolley park, gathered around an emaciated figure lying beneath the trollies. As I reach the door there is the usual gathering of characters begging for change, and the street outside has been closed off to traffic and pedestrians. There are a number of police cars and a crime scene forensics tent has been set up outside a house.

Rumours abound inside the supermarket, a body has been found, a murder, it was chopped up, it has been there for days, all grim speculation. As I come out an ambulance has arrived to deal with the individual prone beneath the trollies. What are the stories our surroundings would tell if only walls could talk.

There are many stories from the last year, stories such as the one related in my last article about this project, working at the side of the road with Keith and John; many of which are positive and others that are absolutely tragic, and I’m sure that I will tell them all at some point. But for now, suffice it to say, I love living in Beeston; for all of the sense of tragedy that surround aspects of life here, it does still feel hopeful. Art is my thing and it is my mission to make sure that, no matter what we are going through in the present, there is still a beautiful world out there. Without hope there is no future, it is up to us now to keep that hope alive for those that will come after. 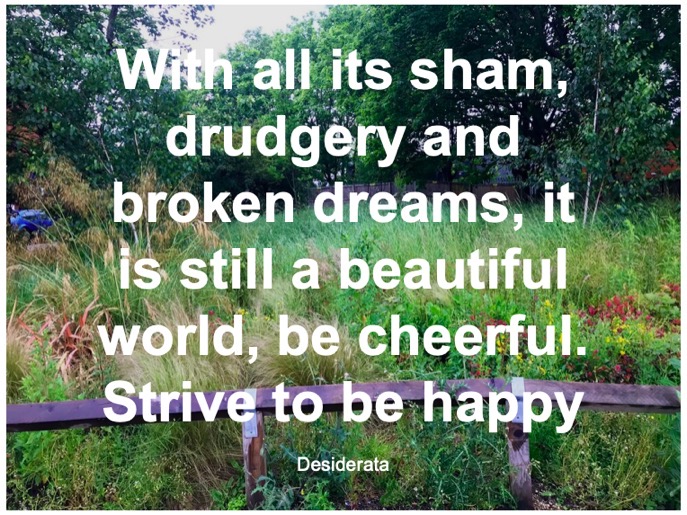 In religious texts ‘Jacob’s Ladder’ represents the connection between earth and the heavens, a connection with god. The ladder also has a secular reading; as a metaphor for aspiration, steps to improvement. And this is what I hope this sculpture represents; the rebirth of a place of tranquil beauty in a tightly populated area typified in the present by chaos and mayhem.

There will be a series of events on this land centred on the ‘Jacob’s Ladder’ project in the coming months, starting in July. I shall post on here details as I confirm them.

The next exhibition at BasementArtsProject – less than one minute from this sculpture – is ‘Resonate’ by Sharon McDonagh. Once a Police Forensic Artist now working as an independent artist presents a look at the stories to be gained from studying our surroundings. Like all of our events it will be free and an open invite to anyone who wants to come. 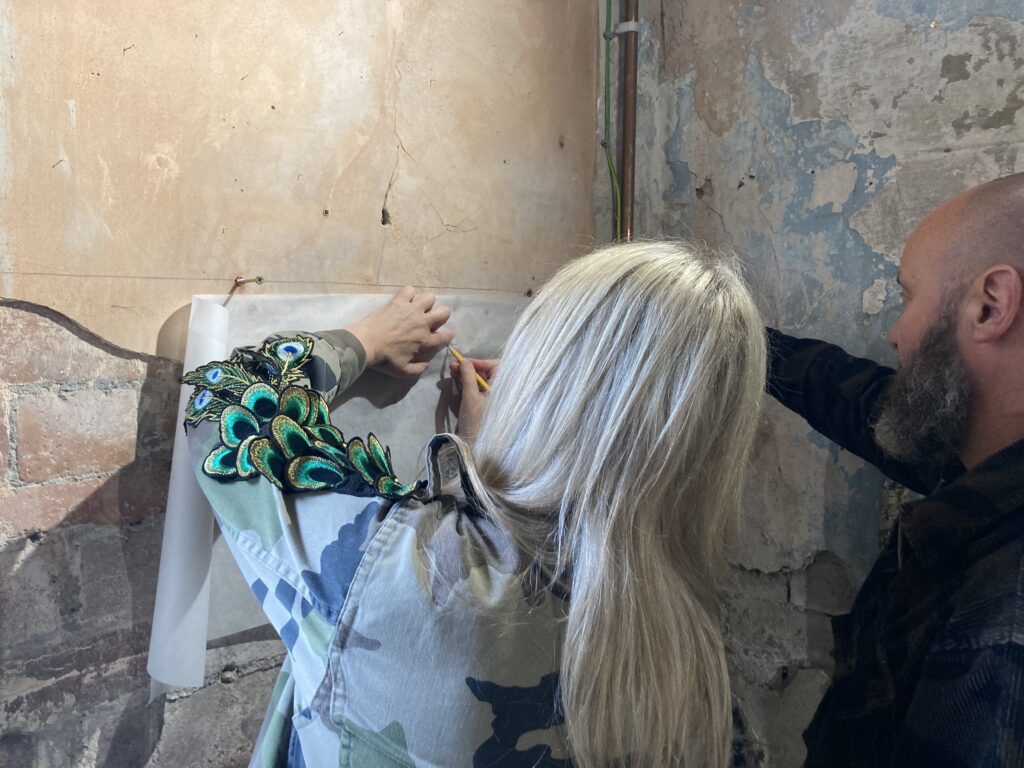 2 Replies to “Art, Drugs, Murder, Memory: A Day in the Life of BasementArtsProject”