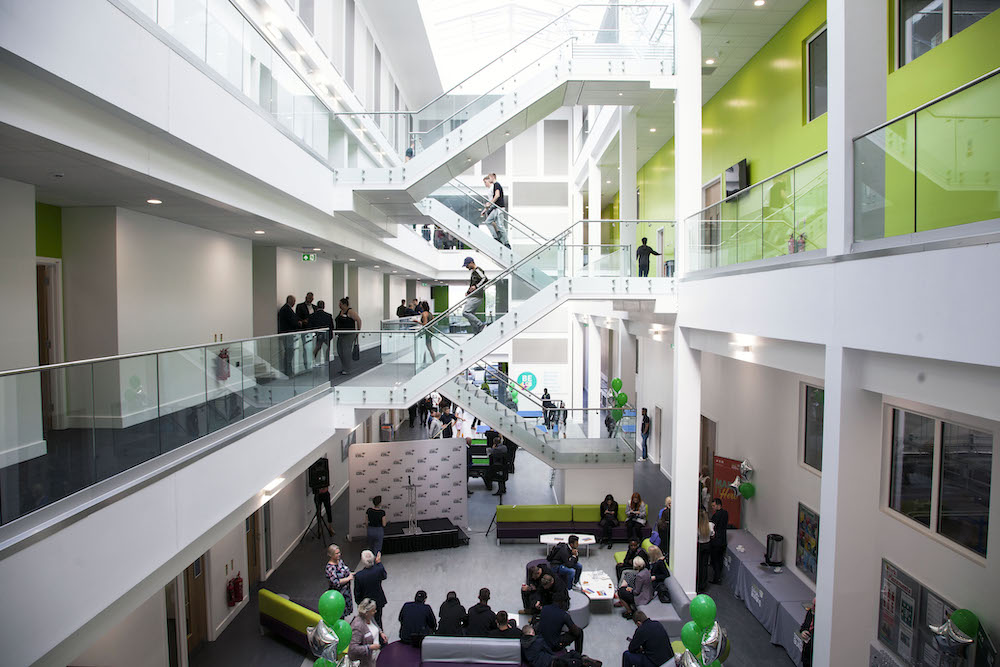 Leeds College of Building expanded their estates portfolio as they officially opened phase two of the South Bank Campus, a £13-million development.

Designed by Fuse, this phase-two development sits in a prominent position alongside the existing College building (also designed by Fuse and opened in 2015 between Cudbear Street and Black Bull Street). The new state-of-the-art 5,200 square metre, four-storey building boasts a range of classrooms, workshops and a dynamic central atrium, which acts as the building’s main communal and circulation space.

A large proportion of Leeds College of Building’s 6,000 students will attend the two South Bank sites, with the remainder using the College’s North Street Campus (which benefitted from £1-million of the funding for refurbishment and the relocation of one of the largest Painting & Decorating training facilities of its kind in the UK).

Speeches were given by Derek Whitehead, Leeds College of Building Principal, Roger Marsh OBE, Chair of the Leeds City Region Enterprise Partnership (the LEP) and Julie Evans, Chair of the Board of Governors at the College. The Lord Mayor of Leeds, Councillor Eileen Taylor, then cut the ribbon at the ceremony and spent time meeting staff, students, and guests.

“The Leeds City Region is proud to host the UK’s only specialist further education construction college. The new campus, right here in the heart of the regenerated South Bank area, is one of our biggest educational assets and will help to address the skills gap that exists in the industry.

“We talk about creating a city region where young people can thrive and achieve their dreams and here, we have a shining example of how we’re laying the foundations for future economic growth that will benefit the whole of Leeds City Region.”

“It is fantastic news that phase two of the Leeds College of Building South Bank Campus redevelopment is now officially open. We want to ensure that the facilities for students in Leeds are of the highest possible standard. This new campus certainly meets these criteria and will offer a wonderful environment in which students can learn the skills they need to prosper in the construction industry.”

“This government is committed to boosting economic growth across the whole of the Northern Powerhouse, connecting places and building an economy which is fit for the future.

“That is why we have provided £11.9m through the Local Growth Fund to support the Leeds College of Building’s South Bank Campus.  The project will provide a 5,200m2 world class, state-of-the-art training facility where students can progress from entry level to degree level, helping to meet the skills gap and needs of the construction industry.”

“We’re delighted to officially open phase 2 of the newly named South Bank Campus. The building will be the new home for a range of traditional courses, including mechanical and electrical, plumbing and heating programmes, as well as enabling us to provide more training in the ever-expanding area of BIM technology. The building will also offer purpose-designed classrooms for the College’s Higher Education courses.”

“It’s four years since phase one of the South Bank campus opened and it has quickly become a prominent South Bank landmark.  This new building complements this perfectly, featuring materials and an architectural language, which also echo the area’s industrial heritage. It’s another highly sustainable building, with a BREEAM Excellent rating.”

“This has been a fantastic project, with great people producing a first-class specialist educational facility for Leeds College of Building. The College now has two bespoke modern facilities at their South Bank Campus to train the future generations of the construction industry.”

“We are delighted to have played a part in delivering a facility that will play a pivotal role in training the next generation of people for the construction industry.”